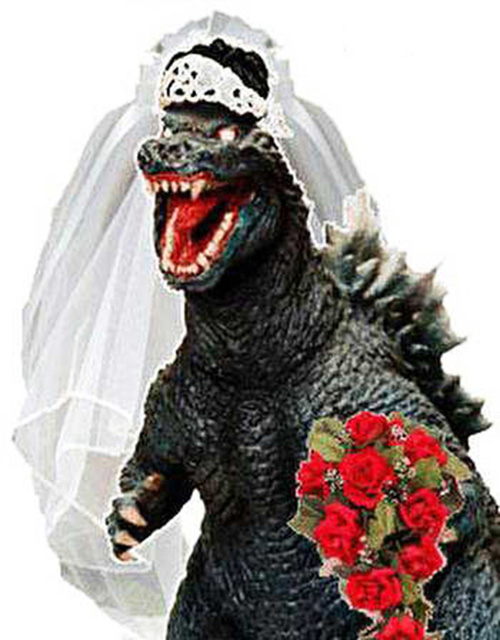 As the summer season reaches its peak, one thing that tops everyone’s list is weddings. I don’t know about you guys, but I find myself invited to several marriage ceremonies that constitute of the same cliché.

Since high school, I have met, known, and befriended too many pathetic girls who don’t know the first thing about being funny, looking good, or getting a guy’s attention. Oddly enough, these young ladies in particular usually seem to be the first that get married. Knowing how unpromising they are (by most people’s standards), all that matters to them is digging their claws into the first naive guy that gives them the time of day. In other words, Bridezilla meets her victim at a perversely young age and remains with him in a “dedicated, committed, long-term relationship” until he is either financially or psychologically capable of tying as planned by her mother, grandmother, and any remaining living ancestors) while her boyfriend proudly boasts to his friends that he is lucky to have found a virgin who he can mold into the lady of his dreams (well, DUH, she’s 16 . . . pedophilia much?).

Now although Bridezilla has been an ass-kisser since the ice age, the minute her wedding date is set, she suddenly becomes the Queen B whose marriage is the event of the season that only the crème de la crème are allowed to attend (of course, being tightfisted is always the reason for why X, Y, and Z are not invited to the La Classe wedding). Bridezilla will also become the love guru du monde who never stops giving relationship advice to friends, enemies, siblings, trees, and furniture. She will say annoying phrases like “3a’belik . . . inshallah nefrah mennik. Yalla, sheddé hemtik.” (Yuck, yuck, YUCK!). My answer is always “metel ma allah bi reed. . . merci”, but what I really want to say is, “sorry but I actually have a life, value my career, and have parents who are willing to support my lazy ineligible self for as long as I want”. God forbid you are still unmarried after 25 (or OH NO, after 28?!), you will be pitied, judged, and expected to have a justification for still being single at such an age; like having male genitals or a fatal, contagious illness. In any case, Bridezilla will always give a condescending smile before she walks away to harass yet another person who couldn’t care less.

Even if Bridezilla is your best friend of 15 years, the moment she gets married, she will slowly drift further and further away from you and your circle of friends, because you are now the loser who did not know how to “play the game” right. She will gradually move into more important circles where she can debate the crucial topics of “Persil vs. Ariel and Filipino vs. Ethiopian housekeepers”. A couple of times per year, Bridezilla will invite you out for lunch (because you’re single, hence broke, with no one to support you) and will pester you with the most meaningless subjects like, “today my son farted for the first time. Last week, I found the most divine cutlery for my kitchen. Oh, let me show you a photo of angel’s first tooth. . .” As Bridezilla continues telling me her exhilarating tales, I reassure her that I’m not yawning because I’m bored, but because my body lacks oxygen . . . yes indeed.

I know I sound like a bitter and jealous old hag who is 170 kg with acne problems, but I promise I am not as such. I am just curious (like many) as to why this transformation occurs after nuptials. Is it conflict of interest? Is it finally finding your role? Or is it simply the way things progress? In any case, I wish that brides-to-be and newly-weds would keep one small truth in mind: before the ring, there was an entire lifetime filled with friends, topics, and activities that made you the person you are today. Letting go of that would be like letting go of your identity. Getting married and having kids is a gift; it just does not have to be limited to baby vomit, detergent, and complaints of boring sex, because us single losers couldn’t give a damn.

“Ideological differences are no excuse for rudeness.” Judith S. Marin