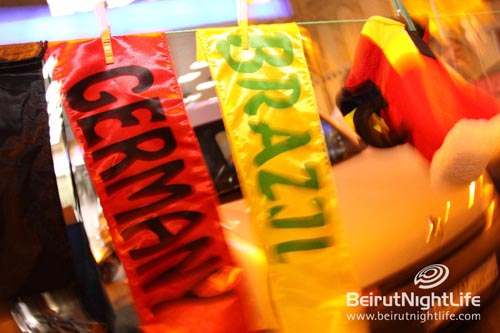 Lebanese Football fans gave a whole new meaning to the FIFA World Cup 2010. Here are the guidelines they followed in order to transform football fever into a tribal battle.

1. You are either a German or Brazilian Fan: because you have no knowledge of football whatsoever and no clue about what other teams are playing.

If you are a German fan, you have the right to be angry (not sure why), and hold up a German flag or preferably a Nazi flag (because God forbid that Lebanese people go one day without affiliating everything with some form of politics).

“How can you not love the home of Mercedes Benz, BMW, Michael Shumaker, and Hitler?” said a German fan. Jeez, such deep relevance! Bear in mind that 80% of these hardcore fans have never been to Germany and are in no way linked to the country. 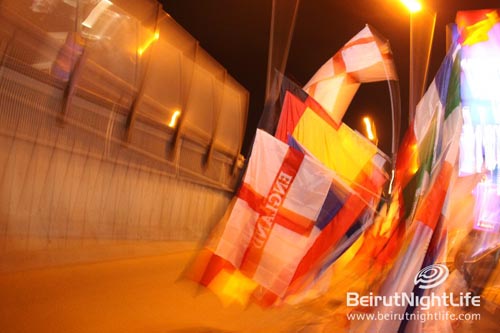 If you are a Brazilian fan, there is no need for a sweater. If you get cold, just wrap a Brazilian flag around your shoulders. You are the cheery, samba-dancing, ‘carnaval’ folk that wears yellow to every game, so that street lights (and/or the sun) aren’t needed anymore. You tell tales of how babies in Rio play football in the sand every day before they learn to walk. “Have you ever been to Brazil?” “Oh no, but I’ll be going in 2014 for the next World Cup – and my great, great, great grandmother is Brazilian”, said a delusional Brazilian fan.

2. When your team wins:
When Germany wins (or whenever Brazil, Italy, and Argentina lose), every anti-German Blackberry user receives broadcast messages, informing them how of much their teams stink, suck, and don’t deserve to live, breathe, or play football – some will even ‘heil’ Hitler (again, such deep relevance!).

[I switched from cheering for Italy to Brazil to Argentina to Spain, solely for the love of the game (yeah right!). So, I lived through the humiliation 4 different times, during which I was verbally attacked by German fans. (why all the anger?!)]

When Brazil wins, fans begin to cry (literally) and hug each other while proudly stating that this is how the gods play football. They will send countless meaningless blackberry broadcast messages like “when samba plays, samba wins” . . . How cheesy! It’s a football game, not a dance academy.

As a result, the blackberry service will freeze for a few hours, leaving all Blackberry users lost, confused, and panicky. 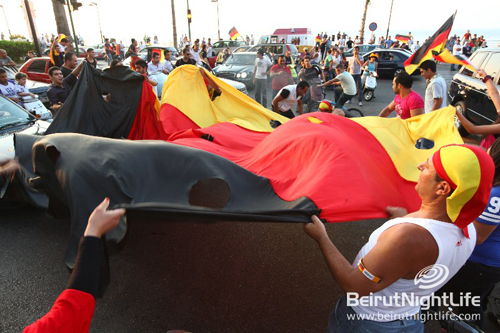 After this, it is time to take to the streets. As if we haven’t all already seen too many mopeds in Brazermany (a.k.a. Lebanon), they somehow multiplied during the World Cup season. I believe there is some sort of “moped/waz-waz” association that summons these gangs to ride together all over the traffic infested streets, creating a ruckus with their foul language, loud voices, frustrating horns, and migraine-inducing vuvuzelas so that they annoy every person from Beirut to Tripoli. All is fair in love and football – including fireworks and gun shots in residential areas. Should the tribes come in contact with one another, we’d be reminded of the movie “Gangs of New York” (but even those gangs were more civilized than the vuvu tribes of Brazermany).

3. When your team loses:
When Brazil loses, it’s no problem; Argentina will suffice. Although both teams absolutely detest each other, they are neighbors; so in the eyes of the Lebanese fans it automatically means Brazil = Argentina. One hour after the ex-Brazilian fans buy the Argentinean flags, Argentina loses in the most embarrassing game ever, but the Brazintineans remain hopeful, for they have already bought flag number 3: Spain. Most were thinking that Spain is another one of Brazil’s neighbors – wow! (seriously??!!)

When Germany loses, there is only one logical reason for that, and thus one logical solution: KILL PAUL THE OCTOPUS!!! There were petitions pleading to spare that poor mollusk’s life!! After their loss, German fans still go out to the streets and ‘celebrate’ because “In their eyes, Germany won!” Tsk tsk. Days later, some buy Spanish flags, and others buy Dutch flags – and this marks the end of the Brazermany Era . . . for now.

This behavior just comes to show that Lebanese people love to fight about the silliest things! The uncivilized behavior demonstrated during football season was worse than the behavior of hooligans and cave men – at least hooligans are cheering for their own country’s teams, and cave men didn’t know about being civilized! That being said, if only we’d all learn to love Lebanon and each other as much as we love football, maybe this country could start becoming a better place. Football or no football, I cheer for my country, Long Live Lebanon!

“Civilization is just a slow process of learning to be kind.” Charles L. Lucas

For more images on the World Cup Fever: