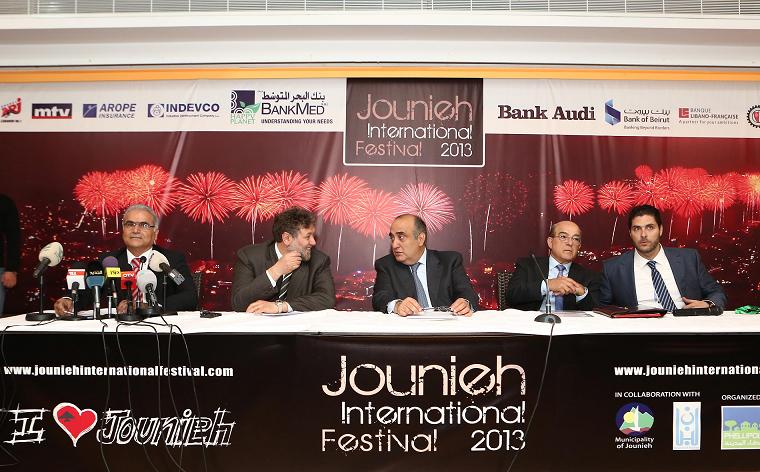 Time to welcome a fresh and fun summer season with the launch of the much anticipated Jounieh International Festival 2013. For the third consecutive year, PHELLIPOLIS, the non-profit association founded by Neemat Frem, organizes the attention-grabbing event of the summer, in collaboration with Jounieh Municipality! Set amongst the beautiful and traditional Lebanese architecture of Jounieh, this year’s summer festival will take place from 21 June to 6 of July.

Presenting the new fun-filled program for summer 2013, Jounieh International Festival organizers held a press conference on April 10th at the Automobile and Touring Club of Lebanon (ATCL) in Jounieh, Lebanon. During the conference, organizers discussed what attractive events are in store for the Jounieh International Festival 2013, highlighting a wide array of shows, games and events, including performances by the internationally renowned stars.

As part of the ‘Les Grands Moments’ world tour, French singer Michel Sardou will offer a unique and exciting performance of his greatest hits on 29June.

Regionally acclaimed Lebanese singer, Ragheb Alama will energize the crowd, performing a selection of his top Arabic singles on 30 June. Whereas, on 3 July, Lebanese-born British pop star Mika will captivate pop-enthusiasts, presenting his third album as part of the “The Origin of Love” world tour.

Jounieh International Festival will open on 21 June 2013 at 10-30 PM with a jaw-dropping synchronized firework show lighting the sky above the captivating Jounieh coastline on the Mediterranean Sea.

The 12-day festival will include parades and street shows, kids and family activities, and promote environmental consciousness with the first ‘Jounieh on bike’ event. The old Jounieh road will be closed on 23 June for families to enjoy biking, rollerblading, and skateboarding along the beautiful coast.

Jounieh International Festival aims to revive/shed light on the vibrant area deeply rooted in heritage and attract tourists and Lebanese residents to connect with Jounieh’s beauty.

The festival brings the streets to life with unique attractions and events that offer visitors a memorable experience. Tickets are now on sale at all Virgin Megastore outlets and Boueiri Press Kaslik.

“PHELLIPOLIS” is a Lebanese non-profit association, whose main mission is to work for the development and modernization of municipal work in order to ensure decent living for the citizen. The association strives to achieve sustainable development in the cities through, human development, social, economic, environmental and tourism projects, thus contributing to the growth of the cities’ overall infrastructure.

“PHELLIPOLIS” promotes its mission through the organization of seminars, lectures, and technical studies related to various fields and issues. Amongst its key objectives: activating the role of the youth, organizing festivals, promoting tourism and enhancing individual and community well-being.