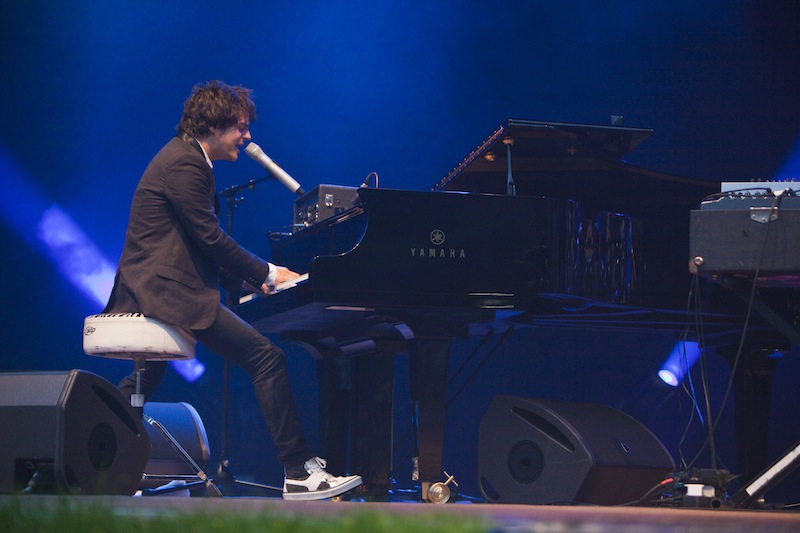 Pianist, crooner and accomplished showman, Jamie Cullum is a one-man variety performance all of his own.Accompanied by a full band, the UK’s biggest-selling jazz-artist of all time will be taking Byblos by storm with his countless revisions of pop and rock staples, high-octane renditions of jazz standards and a growing number of his own hits.

Although primarily a jazz musician, Jamie Cullum performs in a wide range of styles and is generally regarded as a “crossover” artist with his musical roots firmly based in jazz. Since his 2003 album Twentysomething he is the UK’s biggest-selling jazz-artist.

The singer-songwriter’s albums Pointless Nostalgic, Twentysomething, Catching Tales and The Pursuit have sold over 5 million copies worldwide. With a Grammy, two Golden Globe and several BRIT nominations under his belt, Cullum’s success is truly international, taking him from Seoul to Sao Paolo, Fuji Rock to Glastonbury, The Hollywood Bowl to the Royal Albert Hall, London. From Melbourne to Memphis and across the USA where he has achieved huge success collaborating with Clint Eastwood on the Golden Globe nominated score for ‘Gran Torino’.

Jamie Cullum has written for the London West End Stage (When Harry Met Sally), and for the BBC TV series ‘After You’ve Gone’. He has hosted several documentaries for BBC Radio 2 featuring such eminent subjects as Blue Note Records, Herbie Hancock, Jimi Hendrix, and Quincy Jones and currently presents his own weekly prime time evening show for BBC Radio 2, the most highly rated station in the UK.

Jamie Cullum is an artist deserving of superlatives but more complex than a simple set of adjectives can depict. If you know him as “just” a jazz musician or from his strikingly creative way with cover versions (among them, Radiohead’s “High & Dry” and Rihanna’s “Don’t Stop The Music”) you’re just familiar with the tip of the iceberg.

Writing personal arrangements for some of the best-known standards (“Cry Me A River”, “I get a kick out of you”, “Just One Of Those Things”), the singer/pianist once billed “Sinatra in sneakers” is difficult to categorize nowadays: the pop outweighs the jazz, the vocals are less Ol’ Blue Eyes, more rhythm ‘n’ blues, the piano more Jerry Lee Lewis than Oscar Peterson.

But what has never changed is his sheer showmanship and charisma. Jamie Cullum may no longer be a twentysomething kid but he still has the exuberance of one, playing concerts for well over two hours. These gigs are largely improvised, rooted in jazz but not solely consisting of jazz music. His very personal mix of standards, contemporary tunes and ballads will have you tapping your feet and swinging all night long.