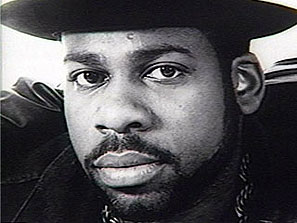 Legendary hip-hop DJ Jam Master Jay of Run-DMC was shot and killed in Queens on Wednesday (October 30), according to police.

Authorities confirmed that Jay, born Jason Mizell, was fatally shot inside a studio on Merrick Boulevard at 7:30 p.m. local time. Another victim, Uriel Rincon, was shot in the leg. Rincon, 25, is listed in stable condition at an area hospital.

Mizell, 37, is survived by his wife, three sons, mother, brother and sister.

Around 9 p.m., during a concert at the Hammerstein Ballroom in Manhattan, fellow hip-hop icon Big Daddy Kane informed spectators that he just had gotten word that “something happened” to Jay, though he did not know at the time if it was true. He then went on to pay homage to deceased rap greats Tupac Shakur, Freaky Tah, Notorious B.I.G., Big Punisher and Big L.

A few blocks away, at the opening of Russell Simmons’ “Def Poetry Jam,” the media mogul was visibly distraught.

“We’ll never have a band,” Simmons’ brother, Run, said in a 1988 interview before pointing to Jay, his one-man sound machine. “That’s our band.”

“Such a good person,” Funkmaster Flex said of Jay on his radio show Wednesday night. “Sometimes when we talk about people passing away, sometimes you forget to say you miss a good person. … For us who knew Jay and other artists who knew Jay, [he] may be one of the few people who embraced things that are new, from artists to DJs. He’s one of the people from the early ’80s who has a relationship with a lot of artists [from the old school and new school].”

“Hip-hop has to take a moment to recognize that we lost one of the gurus of the game,” wrote Farai, 22, of Indianapolis to MTV News’ You Tell Us forum.

“I just loved the fact that while he was dropping the craziest hardcore heart poundin’ beats, that classic smile never left his face,” wrote Matt, 32, from Boston. “God bless you, Jay.”

For close to 20 years, Jam Master Jay, Run (Joseph Simmons) and DMC (Darryl McDaniels) have been touching the lives of multitudes of fans who include their peers and associates in the music industry. Their brash b-boy style introduced hip-hop to the MTV audience with classic clips such as “Rock Box,” “King of Rock” and “Walk This Way,” which also resuscitated Aerosmith’s careers.

“That’s Run-DMC’s mission,” DMC said in a 1988 interview. “Let everyone know this is music. It’s the most exciting form, the most educational, the most vivid and visual.”

It wasn’t just the swinging gold chains, the Adidas sneakers or the black jogging and leather suits. Fans fell in love with Run’s sheer audacity and charisma, DMC’s depth and strength and the Jam Master’s skills. His scratching and mixing exhibitions on songs such as “Jam Master Jay,” “Sucker MCs” and “Peter Piper” (which Missy Elliott uses a portion of on her latest single, “Work It”) were as influential on future turntablists as Run and DMC’s raps were on the MCs who followed in their footsteps.

“Run-DMC definitely made me feel rap was here to stay,” Big Daddy Kane concurred of his peers’ pioneering.

More recently, Ice Cube praised the trio. “They’re the Rolling Stones of the rap game,” he said. “They’re pioneers. Run-DMC made rap emerge out of hip-hop to be the signature art.”

“They took hip-hop to a level that I don’t think nobody’s ever taken it to to this day,” Eminem marveled of their spot in the hip-hop annals. “[Nobody] ever could take it further than they took it.”

Jay, Run and DMC, who were immortalized on Hollywood’s Rock Walk earlier this year, also served as reference points for any hip-hop stars thinking of making a move to the big screen. They starred in the cult classic “Krush Groove” in 1985 and the blueprint ‘hood flick “Tougher Than Leather” in 1988.

Outside of the group, Jay always had his ear to the street, signing Onyx to his JMJ Records imprint and helping to produce their multi-platinum debut, 1993’s Bacdaf–up. Years later, Jay wouldn’t have to travel out of his native borough of Queens to discover another act who would go on to set the streets ablaze — 50 Cent spent time under Jay’s wing, at one point recording 36 songs in 18 days, before eventually making the move to the Trackmasters’ camp and subsequently landing in the Shady/Aftermath Records fold.

Run-DMC recently wrapped a tour with Kid Rock and Aerosmith and were scheduled to perform Thursday (October 31) as part of the half-time festivities at a Washington Wizards home game.

Aside from the Kid Rock/Aerosmith tour, Run-DMC were keeping visible with a handful of TV appearances, including August’s 2002 MTV Video Music Awards. According to DMC, the trio were planning to return to the studio and work on their eighth album, the first since last year’s Crown Royal. The release of the LP and its supporting tour would’ve coincided with their 20th anniversary.