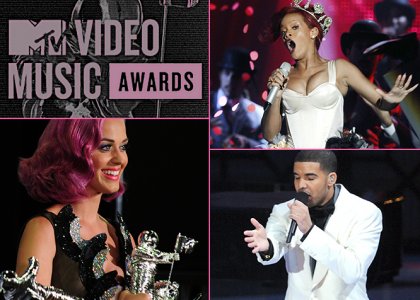 The “2012 MTV Video Music Awards,” broadcast live this evening from STAPLES Center in Los Angeles, was a night of musical firsts with the debut TV performances of new songs by Taylor Swift, Alicia Keys, Lil Wayne, P!nk, Green Day and more.  First-time host Kevin Hart set the lively tone for the evening the moment he emerged with his own unique security detail, while One Direction, Frank Ocean, 2 Chainz and Calvin Harris marked their first-ever VMA performances.

Rihanna, who took home the biggest prize of the night, “Video of the Year,” for “We Found Love,” opened the show with a sultry performance of “Cockiness (Love It)” featuring A$AP Rocky.”  She then turned the arena into a huge dance party, performing her VMA award-winning song, “We Found Love,” with mega-hit producer and “2012 VMA house D.J.” Calvin Harris, who won a VMA of his own for “Best Electronic Dance Music Video.”

A gravity-defying P!nk got the party started from a flying trapeze, performing her chart-topping hit “Blow Me (One Last Kiss).”  Rising R&B singer-songwriter Frank Ocean took the stage for an intimate performance of his single “Thinking Of You,” off his debut album.  Accompanied only by a guitarist, it was an enchanting performance by the VMA newcomer.

U.K. sensation One Direction, took home three Moonmen for “Best New Artist,” voted on live throughout the show, “Best Pop Video,” and first-time VMA fan voted social media category, “Most Share-Worthy Video” presented by Bing, ascended from beneath the stage to a throng of screaming fans, and performed their hit single “One Thing” on a platform high above the audience.

Hip-hop rising star 2 Chainz took to the VMA stage for the first time ever, and together with Lil Wayne, ignited the audience with a performance of “Yuck,” followed by Lil Wayne’s new single “No Worries,” from his highly anticipated mix tape, “D4.” In a pulsating performance from the center of a writhing human mosh pit, Green Day rocked out to their new song “Let Yourself Go.”

Alicia Keys’ electrifying performance of new single “Girl on Fire” featured a surprise appearance by Nicki Minaj, and was accompanied by U.S. Olympian Gabby Douglas, who performed her gold medal-winning moves on stage.

Taylor Swift closed out the epic evening with a fun performance of her new smash single, “We Are Never Ever Getting Back Together” that brought the entire crowd to their feet.  Starting the song in a recording booth, Swift was soon draped by a team of backup dancers as they paraded down the stage with a shower of flower petals raining on the wall of hi-def screens behind them. Swift then crowd dived into the crowd at STAPLES Center amid a sea of confetti.

Title: “What Makes You Beautiful”

BEST POP VIDEO
One Direction
Title: “What Makes You Beautiful”

MOST SHARE-WORTHY VIDEO (Presented by Bing)

Title: “What Makes You Beautiful”

Since the first MTV “Video Music Awards” aired in 1984, the VMAs instantly earned its reputation for delivering the most popular bands and artists to create the loudest, most influential and at times, the most controversial, annual live celebration of music in the world. No other award show has been responsible for creating more memorable or bigger musical moments in pop culture history than the MTV “Video Music Awards.” From Madonna, Michael Jackson, Guns N’ Roses, Eminem and Nirvana to Britney Spears, Kanye West, Beyoncé, Florence and the Machine and Taylor Swift, an appearance on the VMA stage can forever change the trajectory of an artist’s career in a single night.

The “2012 MTV Video Music Awards” aired across MTV’s global network of more than 60 channels reaching more than 600 million households around the world as well as through syndication. In addition, its convergent programming and content will reach the entire interactive community, via MTV’s more than 200 digital media properties around the world.  Ratings for the 2011 VMAs were up +30% YOY internationally, and the show was one of MTV’s top performers in key markets across Europe, Latin America, Asia and Australia.

MTV is the world’s premier youth entertainment brand. With a global reach of more than a half-billion households, MTV is the cultural home of the millennial generation, music fans and artists, and a pioneer in creating innovative programming for young people. MTV reflects and creates pop culture with its Emmy®, Grammy® and Peabody® award-winning content built around compelling storytelling, music discovery and activism across TV, online and mobile. MTV’s sibling networks MTV2 and mtvU each deliver unparalleled customized content for young males, music fans and college students, and its online hub MTV.com is a leading destination for music, news and pop culture. MTV is a unit of Viacom Inc. (NASDAQ: VIA, VIAB), one of the world’s leading creators of programming and content across all media platforms. For more information, go to http://www.mtvpress.com.