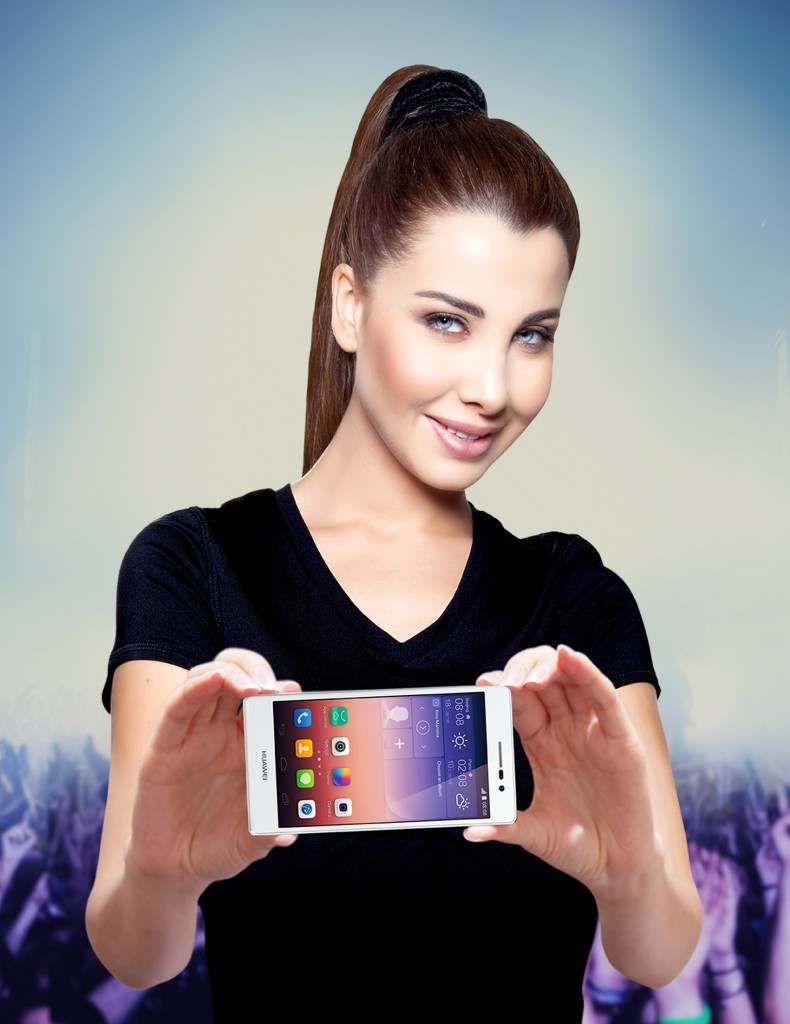 During the launch event, Nancy Ajram revealed her agreement with Huawei to act its Middle East and North African Brand Ambassador for the next year to help raise awareness of Huawei’s fast growing smartphone range and build affinity for its premium devices with regional consumers.

Alongside the announcement of its new celebrity ambassador, Huawei also showcased its latest flagship smartphone that will hit MENA shelves later this month; its feature packed Ascend Mate 7. This new device will be the first endorsed by Nancy Ajram as the marketing campaign star. Boasting a large 6-inch full high definition screen for enhanced entertainment viewing, the smartphone is set to lead the big-screen segment with smarter performance, impressive power efficiency, and outstanding convenience with its superior single-touch fingerprint technology.

In commemoration of its special partnership, Huawei also showcased a limited edition ‘Nancy Ascend P7’ smartphone, which features a customized cover with Nancy Ajram’s signature imprinted on the back of the phone and will be available to purchase from select retailers across ME.

Commenting on her new brand ambassadorship, Nancy Ajram said: “I am actually a big fan of technology and like to have the latest smart devices with the best features. I have been aware of Huawei’s smartphone’s in the region for years and was happy to become a brand ambassador for such an ambitious and fast growing smartphone company coming up with elegant and innovative devices. I hope that my involvement as Brand Ambassador will help to raise the profile of its premium quality smartphones in the region and showcase the great variety of choices they offer consumers.”

“We are thrilled to have the wonderful Nancy Ajram as the ambassador for our smart devices and we look forward to working with her to raise awareness of our innovative and feature packed devices. We also marked the regional arrival of our fastest and most compelling big-screen smartphone experience for consumers; the Ascend Mate 7 that we anticipate will be well received in the region. The smartphone is a true symbol of our relentless commitment to build a better connected word and to ‘Make it Possible’ for people to enjoy our premium quality devices,” said Jiao Jian, President of Huawei Devices Business Group Middle East.

Ascend Mate 7 – Smarter Style, Performance and Functionality
The 6-inch FHD Ascend Mate 7 features a slimmer 7.9mm body for increased comfort, a more powerful octa-core chipset for superior performance and a longer-lasting 4100 mAh battery for extensive usage on-the-go. It saves up to 50 percent of the battery by automatically using smaller A7 cores to power standard apps that consumer use at least 80 percent of the time.

The smartphone also showcases the fastest LTE category 6 connectivity available with download speeds of up to 300 Mbps, this means you can now download an HD movie to the device in less than 30 seconds.

It has a 13MP rear-facing camera to capture better party photos in low lighting with Sony’s 4th generation BSI sensor and f/2.0 aperture. In addition, the 5MP front-facing camera adopts the industry-leading 5P non-spherical lens for higher definition and less image distortion and allows for panoramic selfies to be taken.

With new single-touch fingerprint technology and EMUI 3.0, Ascend Mate7 dials up the mobile experience to make it easier for users to live life to the fullest. ARM TrustZone also stores encrypted data of the fingerprint within the chipset for better protection by SecureOS, and prevents direct access by third-parties. The Ascend Mate7 will be available in three distinct chic colors, moonlight silver, obsidian black and amber gold.