How To Be The Perfect Woman 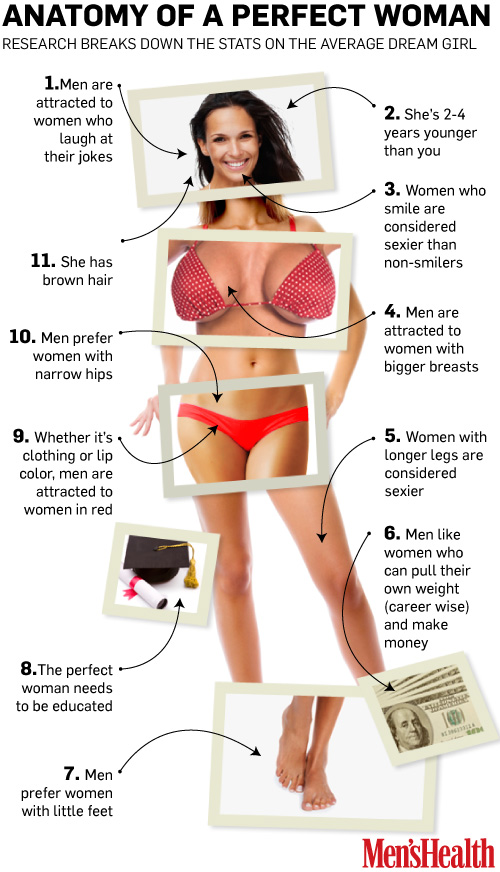 Men’s Health came out with a list of the 11 things that make up the perfect woman, according to men. See if you agree!

You’d think the formula for the perfect woman is pretty simple on the surface: Hot + smart + funny = The One. Yet it seems like every day, there’s a new study that reveals another new thing men find alluring about women. The latest news: According to data in the Journal of Sex Research, men are more pleased with their relationships and sex lives when their partners are 2 to 4 years younger than they are.

So it turns out that simple formula above is way more complex than it seems. That’s why Men’s Health rounded up all the relevant research they could find to create the definitive blueprint for your dream girl. Here’s the anatomy of the perfect woman (ladies, take notes!)

1. You laugh at their jokes


Canadian researchers found that men are more attracted to women who laugh at their jokes. And according to a Men’s Health survey, more than 75 percent of our readers claim that a sense of humor is most important when it comes to a woman’s must-have characteristics.

2. You have a nice smile


Per a study published in the journal Emotion, men find women more attractive when they’re rocking a killer smile. Researchers asked men and women to rate multiple photos of the opposite sex. In some images the person was smiling, and in others, they weren’t. And although women prefer men who sport a more serious expression, guys were most drawn to the women who flashed some teeth.

3. You have big breasts


BREAKING NEWS: Guys like breasts. EVEN MORE BREAKING NEWS: Guys like big breasts. Researchers set out to determine whether or not sociosexual orientation—or your willingness to have casual sex—influenced how men rated the attractiveness of female breast size. The results: Although all men enjoyed what they saw (clearly), the larger pairs of breasts received the highest attractiveness scores from guys who were not in long-term relationships.

4. You have long legs

Maybe we should start watching the WNBA? According to data presented at a meeting of the Human Behavior and Evolution Society, men prefer women with longer legs. Researchers measured the foot length, hand length, thigh length, and hip width on 60 women, adjusting each measurement to account for their individual differences in height. Then for each of the different measurements, researchers selected eight women with the shortest lengths and eight with the longest to construct morphs of their faces. Once the morphs were created, researchers had 77 men judge which faces were most attractive. The result: Men were eight times as likely to choose the long-thighed morph. (Don’t worry, you’re not attracted to aliens—it just sounds like it.)

5. You have little feet

In the same study, men were roughly four times as likely to label the short-footed morph as better looking, which means guys consider small feet more feminine and attractive.

6. You have narrow hips

OK, one more tidbit from that study: Men were also more than 11 times as likely to label the narrow-hipped morph as more attractive. What gives? Researchers hypothesize that men may link these characteristics to a healthier childhood and better genes.

8. You have your own career and money

Are the days of the trophy wife over? Science seems to think so. According to a study published in the American Journal of Sociology, when men were asked about the makeup of their ideal partner, a majority claimed they’re looking for a woman who can economically pull her own weight in the relationship. See ya later, gold diggers.

The days of the dumb blonde are done, too. According to research published in The Journal of Sex Research, men reported being more satisfied when their partner had an adequate educational background. But at the same time, men also reported less marital satisfaction when the female was the breadwinner of the family. So success is hot—just not too much success.

Singer Chris de Burgh was on to something: You really are attracted to the lady in red. In a study in the Journal of Personality and Social Psychology, researchers asked men to rate the attractiveness of a photographed model. Sometimes she wore red, other times she wore white, sometimes the images were bordered in red, and other times they were bordered in white. The results: Men rated the images affiliated with red as significantly more sexually desirable than those linked to white.

In a 2011 study out of the U.K., men rated brunettes as more physically attractive when shown pictures of the same woman sporting red, blonde, or brown hair. The same study found that men also view brunettes as more intelligent, competent, and approachable. Plus, research from Florida State University shows that men also consider brunettes to be more reliable and steady.

What qualities do you think make up the perfect woman?