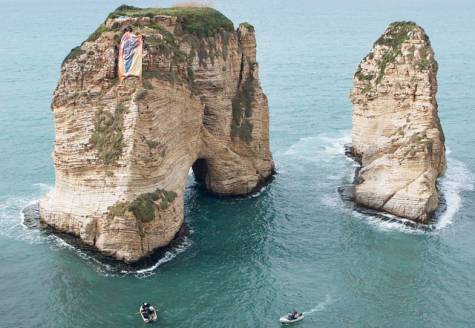 Hala Kawtharani, an author from Beirut, recommends the best places to eat, drink and soak up the atmosphere in the city:

I love the Corniche in Ain Al Mreisseh, where the colour of the Mediterranean is a beautiful dark blue. People spend time there with their families or go jogging. I like to walk there — it’s a great place to clear your mind. From the corniche, you can see the landscape of Beirut and the mountains stretching out beyond.

My favourite street café is the Palace Café on the corniche, which is popular with writers. It’s not fancy but has a great view of the sea. Another café for writers is City Café in the Hamra area. Before the war, Hamra was the most cosmopolitan area in Beirut. There are so many new restaurants and all types of cafés coming up, including some with sheesha pipes. It captures the spirit of Beirut, with the small street cafés and Arab students from all over the world.

I go to Karam every day for its pure Lebanese food — tabouleh, hummus, vegetable meze, followed by Lebanese rice and fish. Usually in Arabic custom, you go with the whole family or a group of friends, because the minimum you have to order is five or six small dishes. In Lebanon, you can have lunch for $25 (Dh92) and, for a good Lebanese restaurant, that is not expensive.

For people of my age, under 40, I would recommend the Music Hall in the Starco area. It’s like a theatre, with red curtains and brown tables, and it’s dark, with only a few spotlights. They play music that’s a fusion of Spanish and Arabic but not too loud. In Beirut, you can find a real mixture of music — Oriental, Arabian dance, jazz, everything. The Gemmayzeh area (near downtown Beirut) is popular with the twenty- and thirtysomething crowd, as there are lots of bars and restaurants, including the Café Gemmayzeh (also called the Glass Café), which dates back to Ottoman times and is one of the best places to hear live Arabian music.

My favourite hotel is the Albergo Hotel, which is in a really old, beautiful area called Ashrafieh, where there are many restaurants, cafés and pubs. The hotel is built in the old French-colonial style and is very atmospheric with antique lifts. It looks out at the sea and has a lounge on the roof where visitors can dine and look out at Beirut. Rue Abdel Wahab El Inglizi in Ashrafieh (www.albergobeirut.com); doubles from £168 (Dh954).

The Metropolis Cinema is the first art-house cinema to open its doors in Lebanon on the premises of the renovated Al-Madina Theatre (formerly Cinema Saroulla). It shows independent films and documentaries of all genres, which provide an insight into Lebanese culture and current affairs. It also invites film directors to present their works. In September, it hosts Beirut’s international documentary festival, DocuDays. Visit Metropoliscinema.net.

The Beirut Art Centre hosts exhibitions by both Western and Arab artists and various lectures and discussions. These things are still rather elitist in Lebanon and I wish everybody could see them. I would also recommend small galleries, such as the Aida Cherfan. This is named after the owner, who displays the works of Lebanese artists such as Hussain Mardi. There’s also the Agial Art Gallery, which promotes contemporary art from the Arab world. The National Museum of Beirut contains more than 1,300 archaeological artefacts.

A night at the theatre

Going to the theatre is like going to a festival. I’d recommend the Babel Theatre in the Hamra district, which hosts festivals and performances by local and international theatre groups.

Sarah’s Bag started as a charity project. The company was set up as part of a rehabilitation programme for women prisoners and those at risk of economic deprivation. They are taught to make bags, which take about 10-15 days. Sometimes they put Lebanese calligraphy and poetry on the bags, which is becoming a trend now. It offers a line of handcrafted women’s fashion accessories. It’s also in a lovely 1940s building in the Gemmayzeh district.

My favourite bookshop is Bissan, which specialises in Arabic books. But I also like Librairie Antoine, which has several stores in the city. The shop is full of French literature and books on Lebanese cinema, cooking, etc.