Green IT Conference: Green Technologies in the IT Industry 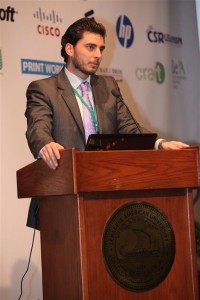 Under the High Patronage of the H.E. Mr. Nazem El Khoury the Lebanese Minister of Environment; Formatech organized the 2nd Edition of the Green IT Conference – Beirut 2011 that was held at the Lebanese American University in Beirut. The event focused on the business benefits of ‘Green’ information technology solutions.

The Conference Committee honored Mr. Ramy Ayach the Social Responsibility Ambassador in Lebanon and the MENA Region in recognition of his continuous ethical and social support towards the community.

The Green IT Conference was sponsored by Oracle, Ericsson and Banque Libano Francaise and was supported by the Chamber Of Commerce in Beirut, Saradar Foundation, Green Party of Lebanon, Tamyyaz and many other giant IT Corporations such as Microsoft, Cisco and HP in addition to relatively recent initiatives like Craft and Be’A Competition who are promising to shed more light on the importance of using IT resources Efficiently.

The Conference was divided into 3 sections; the first one discussed the development of new green technologies in the IT Industry. The 2nd section featured the Cloud Computing and its role in supporting the Green IT Initiatives and the conference was concluded by a Green Activity and a Green Action plan that put into actions all the key learning acquired during the conference. This highly anticipated Green Conference came to an end with Mr. Rami Al Bizri’s (Green Moderator) closing speech where he summarized the event and thanked Formatech for the Great Initiative.