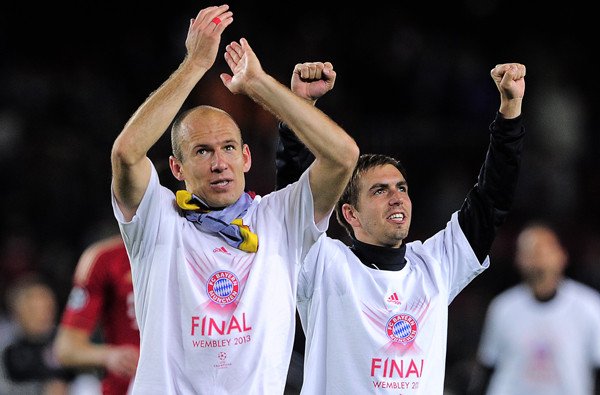 Bayern Munich completed its domination of FC Barcelona with a 3-0 victory in Spain on Wednesday to advance to the UEFA Champions League final against German rival Borussia Dortmund, which advanced Tuesday by eliminating another Spanish league contender in Real Madrid.

Although Bayern Munich advancing to the final was a mild upset, the fact that it walloped Lionel Messi’s team, 7-0, on aggregate was a surprise, even if Messi was hobbled the last month with a hamstring injury that sidelined him Wednesday.

When the Champions League final is played May 25 at Wembley Stadium, it’ll be the first time two German teams have met for the title. Bayern Munich is seeking its first championship since 2001 and fifth overall. Dortmund won its only banner in 1997.

“I’m sure we’ll celebrate with a few beers tonight,” Bayern captain Philipp Lahm said. “I’ve always said we have special characters in our squad, and that we are capable of great things.”

Although the Spanish teams were favored to meet in the final, Bayern Munich will be the heavy favorite after already clinching the Bundesliga title. Oddly, Munich and Dortmund meet Saturday in a league game.

“Wembley will be one of the greatest moments in our lives, but whichever team we meet, we will not be the favorite,” Dortmund Coach Juergen Klopp said Tuesday. “In Wembley, everyone will see we are not going to be satisfied with just being a finalist.”

Bayern Munich, which won, 4-0, in the first leg of the semifinals, received goals by Arjen Robben in the 49th minute and Thomas Mueller in the 76th minute. Barcelona’s Pique had an own goal in the 72nd minute.