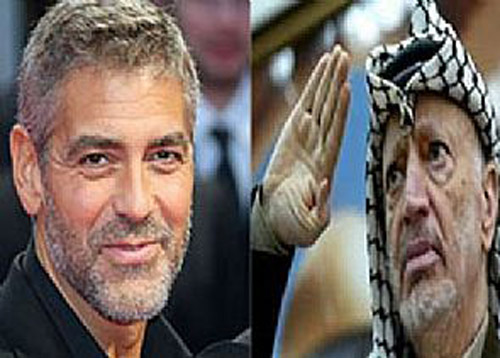 George Clooney has been signed up to play the lead in an upcoming biopic of Yasser Arafat, according to an article in The Hollywood Reporter.

Quoting insiders close to the project in Los Angeles, the publication claims that actor has agreed a deal that will see him play the title role in ‘Yasser’, a new multi-million dollar 3D feature being developed as a collaboration between Steven Spielberg’s DreamWorks Studios and the Doha Film Institute.

While nothing has yet been revealed, the film is believed to chronicle Arafat’s life, beginning with his involvement in the 1948 Arab-Israeli war as a young revolutionary, his founding of the Palestinian Liberation Organisation in 1964, the Lebanese Civil War, First Intifada, Oslo Accords and ending with the siege of his compound and eventual death in 2004. Executives have apparently acknowledged that “a fair amount of artistic license” will be employed in order to “spice up the romance and give stories such as the setting up of Fatah a more edge-of-the-seat, blockbuster edge,” while an “air of mystery and whodunnit” will be used surrounding Arafat’s passing.

Anne Hathaway is tipped to play Arafat’s wife Suha, while Chris Hemsworth is already on board as a younger Yasser Arafat. On the other side, Kevin Spacey is the bookie’s favourite to take the role of Yitzhak Rabin while Alan Rickman is reportedly in final contract negotiations stages that should see him become Arafat’s devious latter-day nemesis Benjamin Netanyahu.

Sources closes to Clooney say the A-lister is “over the moon” to be playing Arafat, and has “long dreamed of donning the iconic headdress and army fatigues”. No director has yet been lined up, but many in the industry expect the task to be handed to Peter Jackson, who has previously suggested any film about Arafat should be spread over three separate films.

“Biopics are huge business these days, with movies about the lives of Margaret Thatcher, Marilyn Monroe and Danny Devito having earned millions at the box office,” claimed film expert Jethro Goldstein, speaking to The Pan-Arabia Enquirer. “Yasser Arafat is a character with all the action, drama and emotion to take biopics into the lucrative 3D market, and Clooney – who looks the part as well as being politically minded – is the perfect choice as the lead.”