Gala Dinner on the Occasion of Mr. Christian Porta’s visit to Lebanon, CEO of CHIVAS Brothers 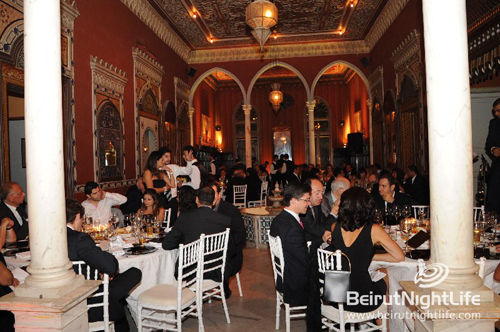 Pernod Ricard and Fawaz Holding organized on Friday 23rd of July 2010 a gala dinner on the occasion of Mr. Christian Porta’s visit, CEO of Chivas brothers, to Lebanon, in the presence of celebrities, social and media representatives and clients.

Mr. Imad Fawaz made a brief welcome speech. Mr. Christian Porta presented a brief context of the visit. The dinner was animated by an entertainment show.

In a glamour decoration & a warm atmosphere, the guests enjoyed and toasted till after midnight making it an unforgettable evening.

Born in 1962, Christian is a graduate from ESCP (Ecole Supérieure de Commerce de Paris). He started his career with Arthur Andersen in 1984 before joining Pernod Ricard in 1988 as an Internal Auditor. He took the position of Head of Financial Services at Pernod Ricard’s Holding – Paris in 1990. In 1994, he became Finance and Administration Director at Pernod. From early 1998 to end of 1999, he was Managing Director of Campbell Distillers in London and then became Chairman and CEO of Orlando Wyndham, maker of Jacob’s Creek Wine, based in Sydney for four years until the end of 2003.
Christian lives with his wife and three children in South Kensington, London.

The Pernod Ricard Group saw the light following the alliance of Ricard and Pernod in 1975, and grew both internally and externally. The acquisition of Seagram (2001), Allied Domecq (2005) and, recently, Vin & Spirit (2008) turned the Group into the world’s co-leader in the wine and spirit market. In 2008/2009, the group’s consolidated turnover amounted to 7 203 million Euros.

Pernod Ricard has one of the most prestigious brands portfolio, including: premium vodka ABSOLUT, pastis Ricard, Ballantine’s Scotch whiskies, Chivas Regal, The Glenlivet, Irish Whiskey Jameson, Martell cognac, Havana Club rum, Beefeater gin, Kahlúa and Malibu liquors, Champagnes Mumm and Perrier- Jouët, Jacob’s Creek and Montana wines. Pernod Ricard is based on a decentralized organization composed of 6 subsidiary “brands owners” and 70 affiliate “distributors” covering all key markets. The group represents more than 19000 contributors. It is also strongly involved in a sustainable development policy which incites it to promote the responsible consumption of its products.