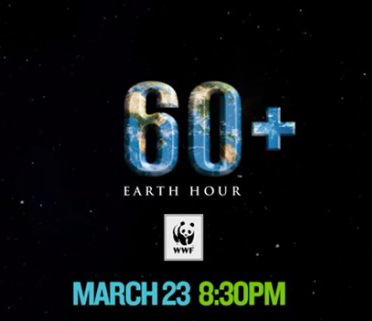 At 8:30 p.m. this Saturday the Sydney Opera House will go dark. Soon after, the Great Wall of China, the Burj Khalifa, the Eiffel Tower, Christ the Redeemer, the Empire State Building and countless others will follow suit. But if you notice any partial blackouts this weekend, fear not. The symbolic gesture simply marks each nation’s commitment to sustainability in 2013 in honor of Earth Hour.

Organizers of the annual event expect more than 7,000 cities and towns across 152 countries and territories on all seven continents to participate this year, including newcomers like Tunisia, Palestine, Galapagos, Suriname, French Guyana, Rwanda and the most remote island in the world: St. Helena.

Indeed, the Earth Hour movement has grown into the world’s largest voluntary action for the environment in the seven years since its humble inception in Sydney. From 2.2 million participants in 2007 to an event that reached an estimated 1.8 billion people in 2012, the organization has come a long way.

Earth Hour executive director and co-founder Andy Ridley partnered with the World Wildlife Foundation from the start and secured a major sponsor in the first year: PricewaterhouseCoopers.

“We wanted a conservative, if you will, and credible company to back our idea,” Ridley told IBTimes in a profile last year. From there, the movement began to spiral exponentially. By 2008, 279 cities and towns in 35 countries participated. The next year it was 4,000 cities and towns in 88 countries.

Ridley — who moved the organization from Sydney to Singapore this year to capitalize on the rising influence of Asia — believes it’s become so successful because “it’s not your classic green fear campaign.”

“Earth Hour has always been more than a lights-off campaign, and we are now seeing some extraordinary environmental outcomes on the way to achieving our long-term vision,” he explained at the 2013 launch.

Ridley pointed to Russia as an example of how Earth Hour goes “beyond the hour.” Not only will 100 landmarks across 50 cities go dark this year, but campaigners in the nation collected 120,000 signatures for a petition, spurred by Earth Hour’s “I Will If You Will” campaign, that was instrumental in passing a long-awaited law to protect the seas from oil pollution last December.

“Russia has considerably raised the bar for Earth Hour and has become a shining example of the incredible environmental outcomes that can be achieved when people work together and take action beyond the hour,” Ridley said.

WWF’s Earth Hour in Russia aims to secure more than 100,000 signatures this year on a petition for amendments to the current forest legislation. If successful, the petition could reinstate a ban on industrial logging in a vast swath of land twice the size of France.

Ridley said that, through Earth Hour’s “I Will If You Will” campaign, “people from all walks of life, from all corners of the globe have been empowered to do what they can — both individually and collectively — to secure a sustainable future for the planet.”

In Botswana, for example, former president Festus Mogae kicked off his campaign to plant 1 million indigenous trees in severely degraded areas over the next four years with 100,000 seedlings in Goodhope.

“These outcomes both evidence the power of our collective action and the potential for future outcomes for the environment, generated by hundreds of millions of people coming together,” Ridley said.

Of course, what actually happens Saturday is mostly symbolic, and some on the far left have branded it as “environmental tokenism.”

Regardless, the list of notable icons going dark for Earth Hour is impressive. It includes Cape Town’s Table Mountain, the Statue of David in Florence, Tokyo Tower, Taipei 101, the Bird’s Nest in Shanghai, Kuala Lumpur’s Petronas Towers, the Gateway of India in Mumbai, the walls of Dubrovnik, Buckingham Palace in London, Times Square in New York, Niagara Falls, Toronto’s CN Tower and the Las Vegas Strip, among others.

Each will turn all nonessential lights off for one hour Saturday between 8:30 and 9:30 p.m. local time. After that, it’s up to everyday citizens to take the movement “beyond the hour.”