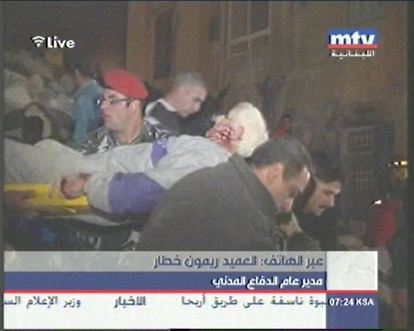 A five storey building, made up of ten apartments, collapsed just a couple of hours ago in Al Motran Atallah Street, Fassouh, Ashrafieh. Its tenants were trapped in the debris and some are still being saved now.

The Red Cross has been on location since the collapse and has been evacuating people. Ten wounded people have already been rushed to the hospital while 15-year-old Anne Marie Abdul-Karim was found dead.

“Voices are being heard from beneath the rubble and a number of vehicles and bulldozers have been scrambled to the scene,” reported MTV, “another building faces the threat of collapse near Qasabli Snack.”

Hospitals all around the area were informed to take in all the victims and give them priority. Residents in the neighborhood are still on the street helping the Red Cross as much as they can.

Our heart goes out to all the victims and their families.