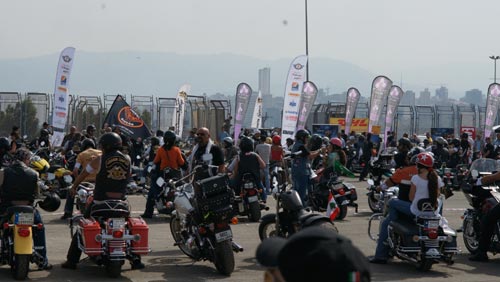 Second Lebanon H.O.G.® Tour attracts riders across the Arab world
Herald as the biggest rolling road tour in the world, the 2nd Lebanon H.O.G.® Tour is now entering its final month of preparation. Taking place on October 1, 2, 3 2010, the official Harley Owners Group event will make the most of Lebanon’s stunning landscape and winding roads that are ideally suited for biking.

Now in its second year, the Lebanon H.O.G.® Tour expects a record-breaking turnout of Harley-Davidson enthusiasts from across the Levant and the Gulf.

It is unique compared to most other H.O.G.® events in that it is a rolling road tour and not a single point of attraction rally. Bikers get to explore the beautiful Lebanese scenery, enjoy the summer weather, and sample some excellent cuisine within a fully organised event.

H.O.G.® was established in 1983 in response to a growing desire by Harley-Davidson riders for an organised mean to share their passion and show their pride. Today more than 1.2 million members make H.O.G.® the largest factory-sponsored motorcycle organisation in the world.

In its first edition in 2008, the Lebanon Tour attracted over 140 Harley-Davidson riders from across the Arab world, even though at the time it was not an official H.O.G.® event. Due to the success of this first Lebanon Tour, H.O.G.® soon recognised it as an official event. In 2009, some 333 bikers signed up for the
1st Lebanon H.O.G.® Tour, making it the biggest event of its kind in the world.

This time round, the organisers hope to break this record with the 2nd Lebanon H.O.G.® Tour. Under the motto of “Ride Safe and Have Fun”, bikers will set off from Beirut and spend a day travelling through the north Lebanese coast and countryside. On reaching the Cedars of Lebanon, they will stay overnight at the Auberge & Cedrus Hotel.

The next day, the tour will take in the city of Baalbek, site of the greatest Roman temples of Bacchus and Jupiter, continue through the Bekaa Valley, then up through Mount Lebanon towards the Mzaar Resort. On the final day, riders will cover central Bekaa and South Lebanon before heading back towards Downtown Beirut.

As well as setting out to promote the beauty, warmth and hospitality of the country, the 2nd Lebanon H.O.G.® Tour aims to create a community of aficionados that transcends physical frontiers and cultural, political and social barriers.

The event also aims to promote safe motorcycle riding, an effort in conjunction with the Lebanese Ministry of the Interior.

“For the second official year, the Lebanon H.O.G.® Tour will unite even more people,” said Marwan Tarraf, owner of Harley-Davidson Lebanon. “For three days, businesspeople, doctors and teachers will join mechanics, construction workers and trades people in this festival of Harley-Davidson motorcycles. This shows how the Tour brings all walks of life together through their love for our brand.

“Harley-Davidson has built a large community across the Middle East, and we expect to see a large number of riders from all the Gulf states as well as Jordan, Syria, Egypt and Lebanon setting out from Beirut on October 1. After our success last year, we are really hoping to break attendance records in 2010.”

The event is organised by the H.O.G.® Lebanon Chapter in co-operation with the Motorcycle and Tourism Club of Lebanon (MTCL), the only non-profit association of Lebanese bikers.