Ferrari dominate the opening of the F1 season at Bahrain GP 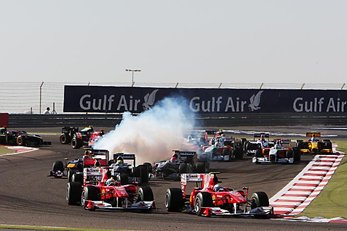 The comeback of the renowned Michael Schumacher with Mercedes Benz did not stop Alonso and Massa from Ferrari team from clinching the first two places in the opening race of this sesaon. Fernando Alonso won on his Ferrari debut in Bahrain on Sunday, leading home team mate Felipe Massa by 16 seconds to earn 25 world championship points.

Lewis Hamilton was third for McLaren, with early leader Sebastian Vettel fourth after exhaust problems on his Red Bull. Michael Schumacher return was not as expected coming in the sixth place. The Bahrain GP has set the competition strategy between the F1 rivals before the next Australian Grand Prix in Melbourne, especially after Ferrari made it clear to all drivers, it will not be an easy season.