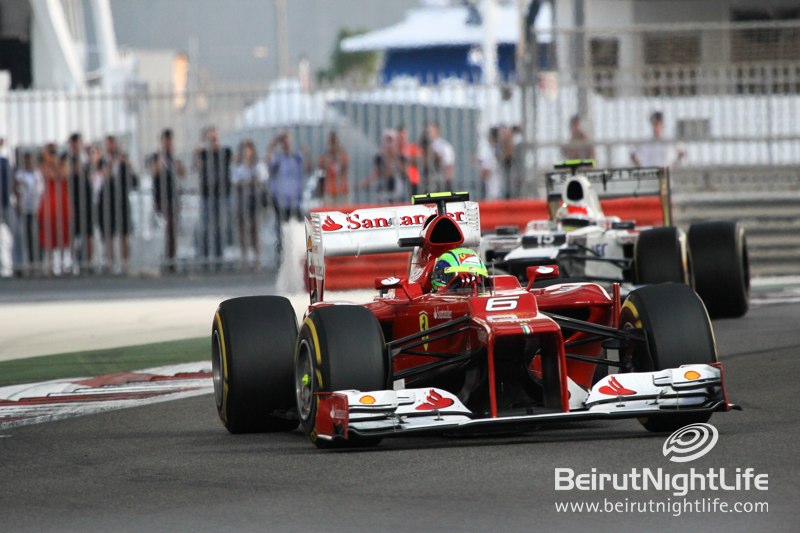 As we promised you BeirutNightLife.com in collaboration with PingDubai will bring you some exclusive and special coverage of the Abu Dhabi Grand Prix festivities.

As the very tense and exceptional season coming to its end, Etihad GP Abu Dhabi pushed the drivers and constructors championship to the edge. A very exceptional race, Alonso getting the maximum out of the Ferrari F2012, while Vettel fought from the back to end up in 3rd place, and an amazing win for Kimi Raikonen Lotus in their first year, who missed the number 1 spot on podium since he left Scuderia.

What makes YAS Marina Grand Prix so special is its huge marina where you can spot MEGA luxury boats, jet setters planing to watch the race in style from the Boats on the Marina. Others enjoy the Cirpriani’s  and Allure building view to the circuit, with an amazing Italian Mezze served with delicious mouthwatering food on Cirpiani’s terrace, and the lovely music and cocktails for those who want to watch the race in a party style from Iris Beirut at Allure lounge.

Eminem closed the race concerts with an amazing performance with a full house at DU Arena, and after that the Island is partying till the early hours of the morning, with the greatest PACHA Ibiza at the Rush Vice Roy Hotel. The Y Bar at the Rotana hotel was one of the favorite spots for many, just feeling the street life party and vibes, and though who wanted it so different and in style SkyBar Beirut ended up its last night with Eva Simons, where DJs Jazzy B and Anthony played the best of house, hip hop, RnB and commercial music to entertain a crowd who wanted to go wild and funky ala Gangnam style.

Our live coverage from YAS Marina ends up for this year, for 4 days we tried to bring it all to you, enjoy our 100s of photos including preparations, Day1, Day2 and the below Race Day album.

A Highlights video will be published soon.