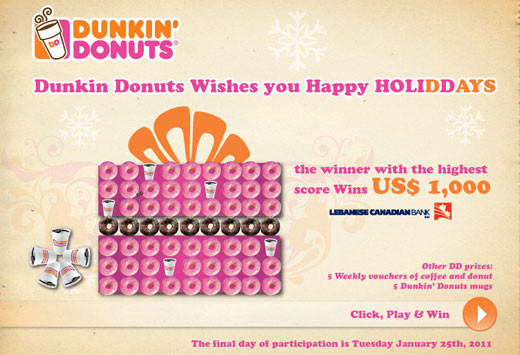 Dunkin’ Donuts Lebanon began in 2011 with a bloom through the online adaptation of the snake game.
Dunkin’ Donuts Lebanon offers users a whole new game on its website inspired by the famous snake game that has accompanied the rise of mobile phones 15 years ago. Who has not played the first game on mobile phone where the snake had to catch as many critters as possible, without biting its tail? Who has not spent hours trying to beat the score of a well trained friend?

For almost a year now, the leading coffee and donut chain, never ceased to amaze its fans and customers with innovative and original events. After launching a new website, the arrival of the star DDLeb and online contests, Dunkin’ Donuts Lebanon begins 2011 with the same resolution: to be visible on the Internet and interact with consumers through the social networks privileged in Lebanon. Dunkin’ Donuts proposes a new version of the snake game, in which the animal is replaced by a string of tempting donuts. One must catch as many DD cups of coffee as possible in order to get the best score. The Lebanese Canadian Bank will grant a reward of $ 1,000 in cash for the most skilled players, as well as many other DD prizes…

Customers have until January 25 to achieve the best scores on the website of Dunkin’ Donuts Lebanon (http://ddlebanon.com/home.html ). Get to your keyboards and let the best one win!