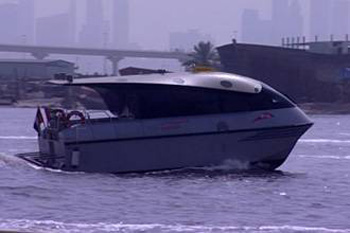 The Dubai Roads and Transport Authority announced launching the long-awaited water cab as part of a plan to solve traffic congestions as well as boost tourism in the Gulf’s most vibrant city.

The government of Dubai assigned the Public Transports Agency (PTA), affiliated to the Roads and Transport Authority (RTA), to run the new five-boat water taxi service which covers 18 of the emirate’s busiest locations, to be increased in the second phase of the project.

Each boat of the new water taxi fleet takes up to 11 passengers and includes a seat for people with special needs. It is also equipped with airline business class seats and an LCD screen at the back of each seat.

The service works from 10 am till 10 pm and passengers can either take the regular trips or call free of charge to arrange a pick up from one the 18 stations, said Mattar al-Tayer, RTA chairman of and executive director.

“The service can also be booked for tourist trips,” Tayer added in a statement.

The rates of water cab services vary according to the distance and type of the trip. Regular trips start at 50 dirhams ($ 10) for one stop and goes up to 570 ($150) dirhams for a trip between the first and last stations, Jebel Ali Hotel and Spa and Dubai Festival City. Tourist trips cost 400 dirhams ($109) per hour.