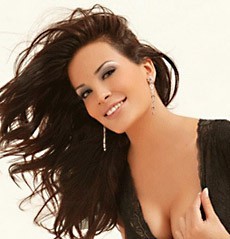 Lebanese singer Dominique denies rumors that have been going around about her marital status. Rumors state that she has gotten a divorce from her wealthy Iranian husband due to the long distance between them.  The singer denies these rumors and assures that she is happily married and like normal couples they always resolve their differences peacefully as long as they both respect each other. at she and her husband have mutual respect for one another. Dominique stated that her daughter is living with her and her husband will be joining them in the near future and will remain in Lebanon.