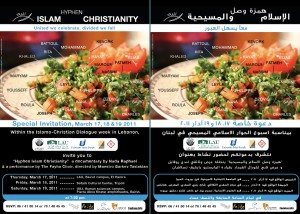 Islam and Christianity are two words and two worlds that collide: in politics, religion, culture, art, social activities, identities; even in cooking, in life styles, and in cloths fashion. And in the wake of their confrontation, the world often tumbles.

Today, the world is in turmoil. People are fighting oppression and/or leaders are fighting the people, while the world listens closely, discovering other countries, different realities, and talking of Muslims and Christians. In the meantime, Lebanon is struggling to find a Government, and people are talking still about Muslims and Christians. Today more than ever we need to see to believe that Lebanon is a message, an array of identities, differences, and Humanity.

What if dialogue and life stories were for once the LEAD STORY? What if media sensationalism would for once support humanity instead of trashing it?

Within the Islamic-Christian week, the Safadi Foundation, the Lebanese-American University (LAU) and the Faculty of Religious Sciences – Institute of Islamic-Christian Studies of the Saint-Joseph University (USJ) invite you to a free cultural event that will take place 3 days in a row: “Hyphen Islam-Christianity”.

You may have heard about this project, “Hyphen Islam-Christianity”, since it has travelled in more than 19 cities across the world. It consists of a collector’s book that was awarded a Special Mention within the 2011 France-Lebanon Contest organized by the ADELF (Association des Écrivains de Langue Française) and a photo exhibit.

Now, it is a documentary that is presented for the first time, in an interactive event that will feature a live performance by the Fayha Choir (a Lebanese Choir from Tripoli, winner of many awards among which two awards by the Warsaw International Choir Festival).

“Hyphen Islam-Christianity” is a documentary by Nada Raphaël and the Fayha Choir is conducted by maestro Barkev Taslakian. We triple your chance to not miss out on this cultural event so make sure to be there.

Check our calendar for more details.