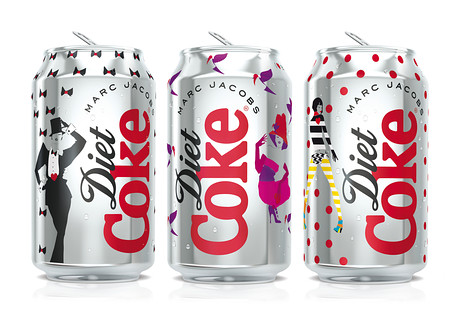 When Ginta Lapina was growing up in Latvia after the fall of the Eastern Bloc, nothing provided as strong a taste of Western culture as Coca-Cola.

So being chosen as the muse and the star of a new Diet Coke campaign in Europe was especially sweet for the 23 year-old model. 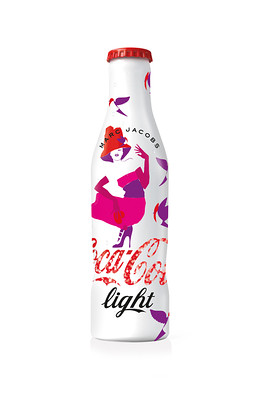 “I always wanted it growing up, but it was only for Sundays and birthdays,” the platinum blond said over a cappuccino in between Paris Fashion Week shows last week.

In a press release, Diet Coke says each of the three editions is meant to illustrate a different decade of “female empowerment”: the 80s, 90s and 00s.

In fact, the containers capture three different decades of fashion as much as female empowerment. The 80s girl is Ms. Lapina in a Madonna-esque purple dress, pink gloves and turquoise pumps. In the 90s version, she wears a skinny black tuxedo. The fashion then jumps more than a decade forward to a striped outfit that is part of Marc Jacobs’ current collection.

In the current day shot, Ms. Lapinta trades her trademark pale locks for an ebony bob, a look she says tempted her to change her hair color. (Mr. Jacobs is dressed more timelessly, in his signature black kilt in each image.)

Ms. Lapina says the campaign was a blast to shoot. The playful poster ads were shot in one day in December in a Parisian studio. She posed on a giant straw, a bottle cap and balanced on a can as Mr. Jacobs tried to pop her off.

Ms. Lapina, who was discovered while studying glass-making in her native Riga, has worked with Mr. Jacobs before – as a runway model for Marc Jacobs and for Louis Vuitton, the French brand he also designs. “He’s one of my idols,” she gushes.