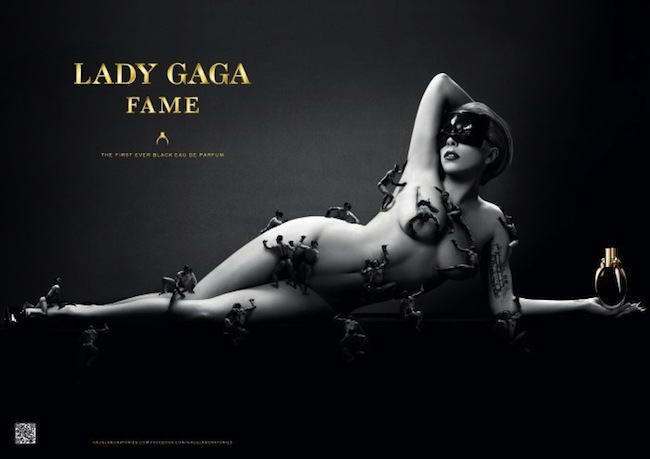 Lady Gaga, who has been teasing us with mysterious little soundbites (blood! semen!) about her perfume for over a year now, is finally releasing the damn thing, and this morning we have all the details about what is definitely a unique and innovative fragrance.

While this crowded, yawn-inducing, cutesy-bottle world of celeb fragrances often makes our eyes glaze over, we’re actually excited about this launch. From the fragrance to the bottle to the marketing blitz that’s planned, Gaga has sort of outdone herself on this one.

So here’s everything you need to know, according to a long and meaty profile in WWDtoday:

• The fragrance is called Lady Gaga Fame and will launch in August.

• It’s the first-ever black perfume. Once you spritz, the liquid becomes clear. A Coty spokesperson said, “The soul of fame being black was the intellectual foundation of the color of the fragrance.” Of course. They actually had to invent some new technology for this black-hearted juice.

• For all you fragrance geeks, the way the notes are expressed is unusual, too. Rather than having top, middle, and basenotes, there is a “trampoline” structure, meaning the notes come out randomly.

• It will not actually smell like blood and semen, unless those bodily fluids smell like a combo of belladonna, incense, saffron, honey, apricot nectar, crushed tiger orchid, and jasmine sambac. (Though we’ve never smelled all those things together so for all we know, it smells exactly like blood and semen. Stand by.)

• The fragrance will come in three sizes, ranging in price from $19 for a rollerball to $79 for the “Ultimate Masterpiece,” a heavy bottle (see pic above) designed by Nick Knight. The egg-shape bottle is a direct homage to her Grammy egg-hatching moment, and the top looks like a gold claw.

• Coordinating black soap, body lotion, and body wash will be released after the perfume launches.

• Steven Klein shot the campaign which will appear in the September glossies. TV spots are in the works too, as well as the de rigeur online film, also shot by Klein.

• Gaga will be making retail appearances (TBA) and is planning a launch on September 13 at the Guggenheim in NYC. A rep said, “There will be theater…she’s not the kind of person who just shows up and says hello.” [Ed. note: Please don’t forget to invite us, Coty!]

So will you buy into Lady Gaga’s vision of Fame? We think we already have.