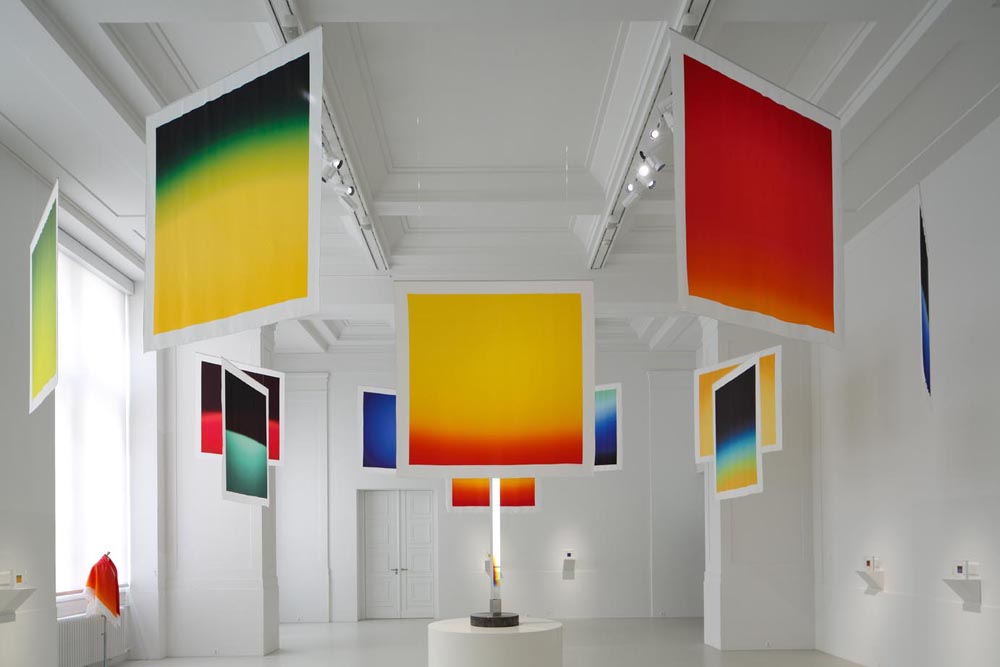 Hermès’ first collaboration with the artist dates back to 2003 and the exhibition History of History in the Forum space of the Maison Hermès in Ginza, Tokyo.

Sugimoto is an artist who is constantly exploring the resources of ancestral crafts in order to develop an inventive dialogue between history, traditions and a contemporary mode of expression that is very much at one with Hermès’ own philosophy.

It was this realisation that prompted Pierre-Alexis Dumas, artistic director of Hermès, to bring the artist’s incisive vision into play for this third edition of the artist’s silk square.

In 2010 Sugimoto presented him with his COLORS OF SHADOW project in his studio in Tokyo: “I can still remember it very clearly. At the centre of a large, light-filled room, rising like a column from floor to ceiling, there stood a very dense, immaculately clear crystal prism. This was an experimental device whereby, every morning, the sunlight passing through the prism would create a world of colours, projected like shadows on the white walls of the studio”, recalls Pierre-Alexis Dumas.

For some ten years, Sugimoto methodically took Polaroids of these subtly varying gradations which were different every time. This was the chromatic epiphany that the artist wanted to capture on a Hermès silk scarf.

The work is inspired by the scientific experiments of Newton and Goethe, researching the origins of colour – that is, breaking down and capturing light, and analysing its emotional impact on humans. This concrete phenomenon is materialised and elevated by Sugimoto in endless abstract images.

Hiroshi Sugimoto and Pierre-Alexis Dumas selected 20 Polaroids to transpose onto silk: 20 scarves each in a limited edition of 7: a total of 140 scarves measuring 140 cm x 140 cm.

This giant format was needed to capture the full chromatic power of these pieces and to give permanence to work made ephemeral by its original medium: the Polaroid.

This is how COLORS OF SHADOW came into being.