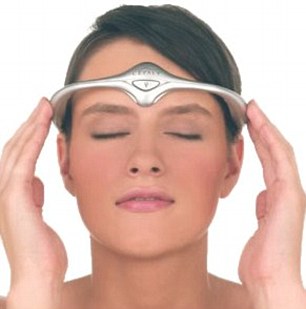 A band worn across the forehead for twenty minutes a day could zap migraines that blight the lives of millions.

The device – which ‘looks like something out of Star Trek’ – delivers electric impulses to the supraorbital nerve that controls sensation in and around the eye.

A study found those who used it were suffering about a third fewer debilitating headaches after a couple of months.

The number of people whose migraines were reduced by half or more were also tripled, according to the findings published online in Neurology.

Professor Jean Schoenen said: ‘The device consists of a thin silver band that looks like something out of Star Trek.

‘It is hooked over the ears and worn across the forehead like futuristic sunglasses. Patients don it once daily for 20 minutes.’

A similar technique has worked on patients with pain in other parts of the body such as the back.

It involves connecting the device to the nerve responsible and sending an electronic pulse to prevent it from causing pain.

Prof Schoenen, of Liege University in Belgium, was also pleased there were no side effects from the treatment.

He said: ‘These results are exciting because they were similar to those of drugs that are used to prevent migraine.

‘But often those drugs have many side effects and frequently they are bad enough that people decide to quit taking the drug.’ 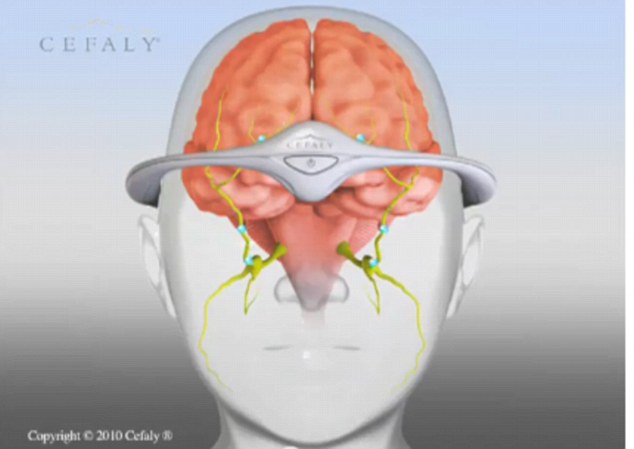 In the study 67 people who had an average of four migraine attacks a month were followed for four weeks with no treatment.

Then they received either the stimulation 20 minutes a day for three months or a sham device where the electric impulses delivered were at levels too low to have any effect.

Around one in four women and one in 12 men experience migraines which can be set off by alcohol, stress, fluorescent lighting and foods such as chocolate, red wine and caffeine.

The World Health Organisation rates migraines as a major cause of disability worldwide and it has been estimated to be the most costly neurological disorder in Europe. 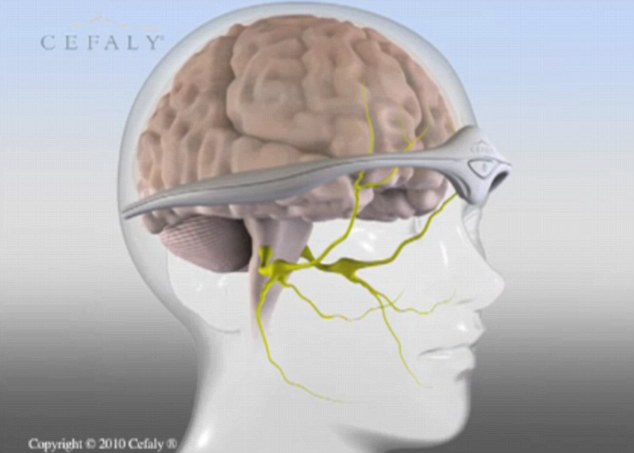 Some researchers have linked them to hormonal changes while others have argued a fall in air pressure reduces the amount of oxygen in the blood.

Lower oxygen levels may cause blood vessels in the brain to dilate – triggering a persistent pain.  It has also been speculated a drop in pressure affects the fluid protecting the brain inside the skull – leading to increased pressure on brain tissue.

The device, known as Cefaly, is CE marked and costs around £260. It has been submitted to the FDA in the U.S but has not yet been approved.

The study was published in the journal Neurology by the American Academy of Neurology.
Source: http://www.dailymail.co.uk