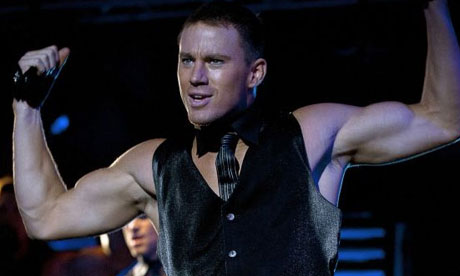 He may have bared (almost) all of that incredibly chiseled body in this year’s Magic Mike but 2012’s Sexiest Man Alive Channing Tatum was still modest when he heard the news.

“My first thought was, ‘Y’all are messing with me,'” says Tatum, who married actress Jenna Dewan-Tatum in 2009. “I told Jenna after we’d been in the bathtub washing our dogs because they’d gotten skunked.”

“Yeah, she calls me [the Sexiest Man Alive] now,” he adds. And who can blame her?

Her Alabama-bred hearthrob of a husband is also a sculptor who quotes Edgar Allan Poe, loves to give her massages and can’t wait to start their family. “I’m ready; I think she’s ready,” Tatum, 32, says. “The first number that pops into my head is three, but I just want one to be healthy and then we’ll see where we go after that.”
“It’s really easy for us guys to say, ‘I want like 15 kids,'” he continues. “Jenna will be like, ‘Well you better get another wife!'”

Currently training to play an Olympic athlete in next year’s Foxcatcher, Tatum is all heart and muscle at 195 pounds. “I like to be lean. If I get too bulky I can’t move well and I like to move,” he says. “When I’m not training, I get really round and soft.”

Which is just fine by his wife. “People know him to be fun and sexy, but they don’t know how emotionally deep and spiritually open he is,” says Dewan- Tatum, 31. “He is such an open-hearted person; what you see is what you get.”