Cedar of Lebanon: Pledge of Eternity 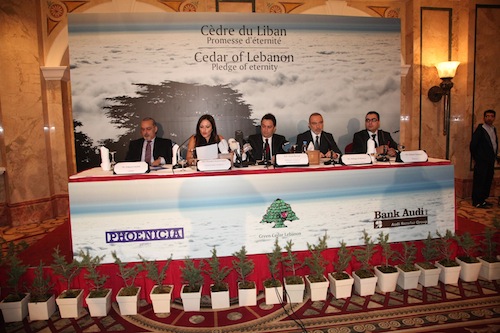 Lebanon witnessed the launch of “Cedar of Lebanon, pledge of eternity”, a first of its kind documentary book on the immortal Lebanese Cedar. The signing ceremony was held in Phoenicia Hotel under the auspices and presence of H.E. Minister of Interior and municipalities Ziyad Baroud. It was attended by the country’s VIPs, members of the press as well as the authors – Pascale Choueiri Saad, Lara Hanna Debs and Clement Tannouri- who unveiled the book’s first edition.

“The funds raised through the book will be donated to the reforestation of two public parks in Beirut- Sioufi and Sanayeh”, said Pascale Choueiri Saad, co-owner of Green Cedar Lebanon and co-author of the book. “We believe there is a strong need to create awareness around the enormous damages and environmental tragedies that our beloved country is encountering”, she added.

Showing in its own way the majestic culture, history and ecology of the Cedar of Lebanon, the book complements national efforts to enhance public awareness on the importance of preserving the Lebanese forests in order to avoid enormous damages and environmental tragedies. The authors define their book as a pledge to keep Lebanon green by building a civic responsibility, especially towards the environment.

Lebanese Minister of Interior Ziyad Baroud praised this initiative by raising his voice to stop damaging what is left of the green Lebanon: “Our primary goal is to reduce illegal deforestation in Lebanon. We share Green Cedar’s commitment to protecting the natural environment, and we applaud all the involved parties for making Beirut a greener city”.

“Cedar of Lebanon, pledge of eternity” book is the second initiative of Green Cedar Lebanon. All the funds of their first book “Green Lebanon, the book” were donated to “Akhdar Dayem” association. This year, all the profits of the sold books will be offered to the UNDP for the reforestation of two parks in Lebanon, Sioufi and Sanayeh in collaboration with the Municipality of Beirut.

“We announce hereby the launch of the environmental revolution and are delighted to have UNDP through its environment and energy program join our troops”, said Philippe de Bustros President of the Environmental and Public Gardens Committee, member of the Municipality of Beirut council. “Beirut is ours… Let us raise our voice, let’s put an end to this recklessness. Simple words will be turned into laws, laws into work, and work into a spark of hope that will change the reality of our city”, he added.