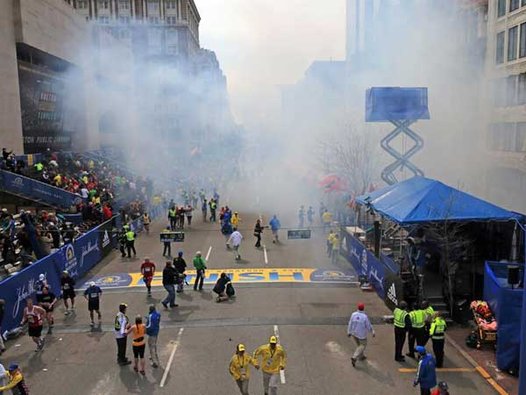 At least two explosions at the Boston Marathon today left several people injured, with the effect amplified through social media.

The scene in Boston remains chaotic and few details have been confirmed, including just what caused the twin blasts at the finish line at about 3 p.m. Eastern time. There have been reports of multiple injuries, and a web-hosted Boston police-EMS-Fire Department scanner, frequently tweeted, contains reports of a “several suspect packages,” including at least one reported at the Mandarin Hotel. A Vine video apparently captured one of the explosions.

“There are a lot of people down,” one man, whose bib No. 17528 identified him as Frank Deruyter of North Carolina, said, according to ESPN.com.

First responders are requesting explosive-ordnance disposal units to the scene of the suspect packages. Voices over the scanner warn that people, including runners, currently hurried into bars and restaurants near the marathon, need to remain indoors until a street sweep for possible explosives can be found. “People should get away from the area as quick as possible” is a message that Boston first responders say they want put on social media.

A secured command post is being put together at the Copley Square Westin Hotel. There are reports of a “possible incendiary device” at the JFK Library at the University of Massachusetts in Boston.

The FBI referred comment to the Boston police department.

It is far too early to speculate about what was responsible for the blasts in Boston. First reports of such disasters are almost invariably incorrect. But those caveats may not be enough for an era of social media. Within minutes of the blast, photographs of the gruesome scene rocketed across Twitter andFacebook. Unconfirmed reports and frequent commentary — including those warning about premature speculation — have been flying across Twitter, compressing the cycle of reaction to the disaster.

We will update this post as soon as additional confirmed information becomes available.

There is a police-controlled detonation of a suspicious item on Boylston Street.

The Boston Marathon stated on its Facebook page that the explosions were caused by “two bombs.”

A White House official sends a statement: “The President has been notified of the incident in Boston. His administration is in contact with state and local authorities. He directed his administration to provide whatever assistance is necessary in the investigation and response.”

Col. James Sahady, a spokesman for the Massachusetts National Guard, confirms there were over 400 National Guard troops present for the Marathon. It’s unclear as yet what, if any, bomb detection tech they had on the scene.

Air Force Lt. Col. Tom Crosson, a Pentagon spokesman, says he’s unaware of any current requests from Massachusetts for additional military assistance. That may be liable to change.

Boston police have tweeted that there are currently 23 people injured and two dead.