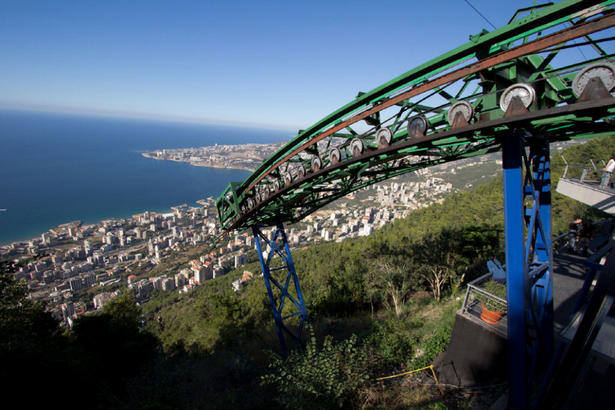 There’s a patchwork of tile under my feet, the teenagers — mostly university students, it seems — are speaking English, and there are enough cafés to make the cast members of “Friends” jealous.

And I swear I just heard Tupac blasting out of that guy’s convertible.

After years of civil war and political strife, the city once known as the “Paris of the Middle East” is re-establishing itself. And to quote from a certain Hollywood superspy: The Mojo’s back, baby.

“This country tends to be resilient,” explains Ronnie Chatah, a blond grad student whose ponytail, jogging pants and goatee make him look more beatnik than Beiruti.

Chatah lives just a few blocks from the Al-Hamra, the city’s youngest and in his words “hippest” district.

Chatah would know. For the past few years he’s been operating Walk Beirut, a tour that lasts up to five hours and takes visitors through some of Beirut’s most famous — and once embattled — neighbourhoods.

From 1975 to 1990, Beirut was locked in a civil war, including an Israeli invasion in 1982, with rival militias fighting for control over the city. A ceasefire in 1990 ushered in a period of relative calm, and young Lebanese who had gone overseas began flocking back to rebuild their homeland.

Things stayed that way until 2006, when Beirut’s streets once again became battlegrounds during the 34-day Israel-Lebanon War. It took a United Nations-brokered ceasefire to stop the fighting between Israel and Hezbollah. In the end, some 1,300 Lebanese — mostly civilians — were dead, and much of southern Beirut was reduced to rubble.

Today, its buildings are repaired, its bridges rebuilt and despite the constant threat of political upheaval, many believe Lebanon is more stable than it has been in years.

And Chatah is hoping to cash in.

October was the busiest month ever for his walking tour, which includes stops at Martyr’s Square — where during the war rival snipers on rooftops would take aim at civilians — and the former Wimpy’s Diner, a focal point of resistance to the ’82 Israeli invasion. Perhaps as a sign of the times, the former diner is now an upscale clothing store.

“There are a lot of buildings here that still speak,” Chatah explains. “They tell a story, and they haven’t been touched — which is good.”

Nowhere is that more obvious than the empty, 26-storey Holiday Inn that looms above the city’s downtown core. The hotel was heavily damaged by artillery in 1975. Built to withstand an earthquake, the building’s walls remain intact — large, gaping holes along its side a reminder of Beirut’s darker days.

Today, like a garden in bloom, there are signs of life. Large, modern hotel and condominium high-rises — funded largely by Saudi and Kuwaiti investors — are going up at a furious pace. And tourists are coming back.

“No more fighting, khalas,” Rita Chhbat says with a laugh. She is a communications director for the Moevenpick Hotel, one of a small handful of luxury resorts with a gorgeous cliffside perch overlooking the Mediterranean Sea.

She describes the city’s tourism industry as a roller-coaster: Up, down, then back up again. The hotel had a record year in 2009. At one point, Chhbat says, they went through a full month with 100 per cent occupancy — something unheard of in years gone by.

In 2010, sales also exceeded expectations, with occupancy peaking at around 80 per cent — even during the low season. With a flood of foreign investment and a downtown core that’s quickly becoming the most expensive real estate in the Middle East, there are signs the upswing could be permanent.

“Lots of people think just because we’re in the Middle East, it’s a desert here,” she says, laughing again. “We don’t have a desert and we don’t have camels.”

What Beirut does have is streets lined with palm trees, an active nightclub scene, and — if my time here is any indication — perhaps more BMW’s per capita than anywhere in the Middle East. Walk along the city’s corniche, it’s easy to think you’re in Beverly Hills.

It’s also the only place in the Middle East where you can go skiing in the morning, sunbathe on a beach in the afternoon and hit up a local pub at night. And because a large percentage of the population is Christian, the city doesn’t slow down during Islamic observances like the month of Ramadan.

“Everybody is a friend of ours,” explains Jad Boukhzam, a veteran tour guide, as we drive along the corniche. We pass stores with names like Lancel and Rodeo Drive, with modern condominium high-rises all around.

Boukhzam admits that the political climate can always change, but is adamant foreigners needn’t worry about safety.

“We don’t refuse anyone,” he says. “Everyone is welcome. If you’re from outside, ahlan wa sahlan.”

“The thing about Lebanon,” he explains, “is that even if there are groups of Lebanese fighting, once they find out you’re a foreigner, you’re safe.

“It doesn’t matter which side they’re on. They’ll still invite you over for dinner.”

Muhammad Lila is a TV journalist for CBC News, based in Toronto.