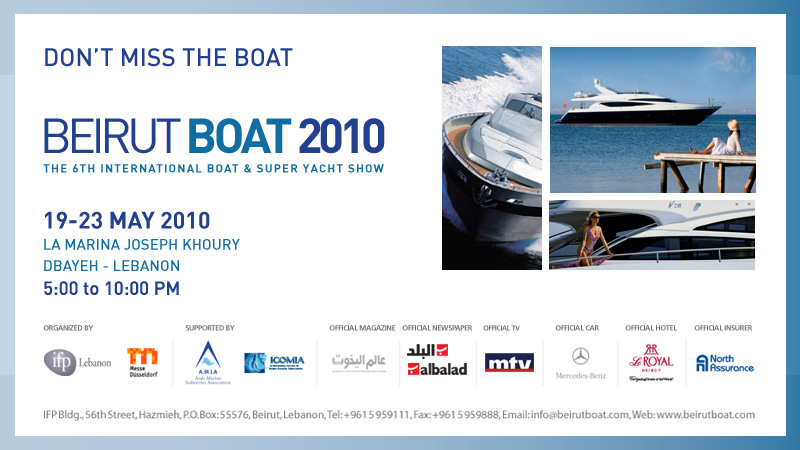 BeirutNightLife.com cordially invites you to visit its stand at the Beirut Boat Show 2010. The stand is allocated in the closed area at La Marina (Joseph Khoury) Dbayeh, at stand A18. The show will take place starting May 19th, 2010 and will remain open Sunday May 23rd.

Set your course for Beirut Boat 2010, the Middle East’s favorite showcase of pleasure craft and related products for every budget. Scheduled for May 19-23, 2010, at La Marina Joseph Khoury in the Beirut suburb of Dbayyeh, the 6th International Boat and Super Yacht Show will take place with a dazzling new format – but the same VIPs and serious boating enthusiasts that our previous shows have consistently attracted. Beirut Boat 2010 will feature an overhauled line-up of activities and special events designed to put wind in both your sails and your sales by attracting consumers from every market segment.

Apart from a breathtaking display of boating and yachting magnificence, the show will also feature leading names in all things maritime, including Leisure and Water-Sports; Accessories, Components and Equipment; Marine Industry Associations; Brokerage and Financing Services; Designers and Builders of Marinas and Shipyards; and Marine Lifestyle and Luxury Accessories.

Stormy political waters and regional economic doldrums forced a suspension of the show from 2006 to 2009, so Beirut Boat 2010 will tap into years of pent-up demand. Industry statistics clearly point to accelerating growth for the boating sector across the region, and Lebanon’s status as the Eastern Mediterranean’s most inviting tourist destination can only help Beirut Boat 2010 to resume its role as the Middle East’s premier boating event.

Coming in direct response to the increasing demand of boating and other water sports activities, immense projects are underway on the costal line of Lebanon from the South up to the North
Unprecedented development of marinas and waterfront facilities in the Middle East

Extensive water and on land display on exhibit
The showcase will include a variety of moored boats, sailboats, yachts and super yachts from different manufacturers. More than just a floating show of the world”s top brands, Beirut Boat also features on land display of marine equipment and instruments, engines, accessories and a wide range sport gear for all types of water enthusiasts, which also cover hundreds of top brand names. Visitors can also expect to see a variety of services with their representatives including marinas, major touristic projects and touring agents, marina developers, brokerage, charters, etc.

Investors pumping billions of dollars into marina development in Lebanon and the region
Soaring regional demand for boats over the last few years has spurred massive investment in waterfront development. Over the next five years, a whopping $20 billion will be invested in the sector. A stunning $1 billion has already been spent on marinas and seafront developments in Lebanon alone.

Regional visitors to Lebanon grow by over 100% as tourism and marine facilities expand
For the past years, Lebanon has returned as a favored tourist destination with a full range of historic, natural, and cultural attractions. International arrivals are growing by more than 40% annually covering different nationalities, and the number of highly sought after Gulf visitors has doubled over the past years. Beirut International Airport is host to some 36 international airlines. Recently built marinas and waterfront facilities constitute a major part of the boom. Coming in direct response to the increasing demand of boating and other water sports activities, immense projects are underway on the costal line of Lebanon starting from the South up to the North.

Jointly organized by Messe Düsseldorf and International Fairs and Promotions (IFP)
Two major players join efforts to organize the Middle East”s premiere boat show. Beirut Boat 2006, the 5th International Boat and Super Yacht show will again be jointly organized by Messe Düsseldorf, organizers of the world”s largest boat and water sports trade fair (boot-Düsseldorf) and, International Fairs and Promotions (IFP), the Middle East”s leading fair organizer, ensuring the highest standards of both quality and professionalism. The show will once more be the center stage of the latest product lines from the world”s leading boat, yacht and super yacht producers to thousands of visitors including hundreds of VIPs from around the region.