BeirutNightLife.com and GOINLEB announce partnership to promote Lebanon as the best touristic destination in the region 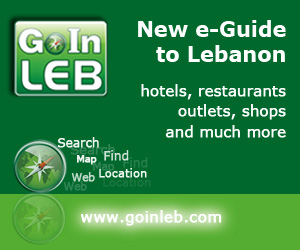 BeirutNightLife.com, the number one digital media promoting tourism in Lebanon has announced tie up with Goinleb the interactive online information and navigation system that has recently launched in Lebanon to cover Beirut area. The partnership comes as part of the two digital media’s goal to promote Lebanon and the no.1 touristic destination in the region.

The tie up with the advanced research engine will include features of BeirutNightLife.com site to direct visitors and patrons to the several venues featured on this entertainment site. The first of its kind partnership between to local Lebanese digital media is another standard set by BeirutNightLife.com in the world digital world.

Jean Ghalo, BeirutNightLife.com MD, said: “We have raised the bar again in the digital media. We are proud to partner with GOINLEB a technologically advanced product in Lebanon to promote Lebanon not only to the region but on an international level. Rather than using a google map to indicate location, we preferred to tie up with a pure Lebanese product that offers accurate indication and other information.”

Ghalo added: “BeirutNightLife.com supports such initiatives especially if it works to the well being of promoting the land of the Cedars all over the world. This partnership is another step forward in a series of steps that will be announced soon to the public bringing you the best of services to achieve our goals. Again we are glad to announce this partnership that will evolve in the near future and attract web users from the region, Europe, and other continents seeking to visit Lebanon.

Goinleb is an advanced search engine featuring easy-to-read maps that enable the exploration of the entire country by area, street, building, business, brand, or institution. Results of the search offer detailed information on a multitude of establishments and industries across Lebanon.

“The recent months have seen the launch of Greater Beirut zone only as a first step. We wanted to measure the impact of this user-friendly site on the public before launching other zones. The enthusiastic response from a mere user to a company CEO was tremendous sign that Lebanon was quickly opening up to all internet related businesses and means of work. The expansion will be done gradually to cover the entire country in a few months’, said Maroun Ghannam, managing director at Goinleb.

Besides its multi-functional usability with regards to location, narrative and description of various sites and landmarks across the country, Goinleb offers a multitude of marketing opportunities to businesses and institutions in Lebanon by showcasing services, offers and promotions of the subscriber.