Beirut is Reborn as a Glitzy Playground for Tourists 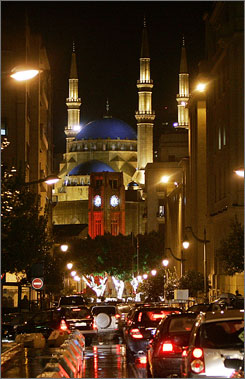 By Joseph Eid, AFP/Getty Images. Place de l'Etoile: On a rainy winter's night, the landmark Mohammad al-Amin mosque looms over the parliament's clock tower in the heart of the capital.

BEIRUT — On a mild Tuesday evening in downtown Beirut, the city’s young and beautiful are bellying up to the hottest night spot, the bohemian Gemmayzeh neighborhood. Model-chic Beiruti women, sporting skinny pants, stiletto boots and cascading tresses, cluster in groups or with dates inside the hip bars, pubs and restaurants that line this milder Middle East version of Bourbon Street.
Not far away, in the Old World-style Albergo boutique hotel, visiting Michelin-starred chefs from France are dishing out meals for a sold-out crowd that takes Beirut’s sophisticated dining scene for granted.

During the summer, the trendy flock to swank rooftop clubs — Noir, Sky Bar or White Bar, where Champagne bottle service can run $10,000 — to dance till dawn.

Call it Sex and the City meets South Beach.

Beirut’s sizzling nightlife, from gritty to glam, helped drive a record tourism year in 2009. Overcoming a reputation as a Middle East trouble spot, Lebanon welcomed nearly 2 million visitors last year, a 39% increase over 2008. It was the No. 1 destination for tourism growth in the world, according to the World Tourism Organization.

“Lebanon is back,” Nada Sardouk, Lebanon’s tourism director general, told the Middle East news agency AMEInfo.com in December. “We’ve had 80% to 90% hotel occupancy this year. But it’s more than about just numbers. … It’s about the joie de vivre.”

That exuberance is drawing mainly Gulf Arabs for the liberal lifestyle, Mediterranean climate and beaches; returning Lebanese expats; and intrepid Westerners. After years of political turmoil and war, a newfound security and calm has settled over this parliamentary democracy, ushering in a renaissance, however fragile. Although Lebanon is still on the U.S. State Department travel warning list, Beirut itself was virtually free of sectarian violence last year. The peace dividend is evident in tony new hotels, sleek malls and office towers, and a vibrant arts and music scene, which draws the likes of Snoop Dogg and international DJs.

One anticipated newcomer is Le Gray, a chic boutique hotel that British hotelier Gordon Campbell Gray opened in November. Over roasted quail in its rooftop Indigo restaurant, Campbell Gray gushes about this city of 2 million. “Beirut is a real city, with real history and edge. That makes it sexy,” he says. “I find it beguiling, exciting, damaged, vain, beautiful. This is the new hot place.” 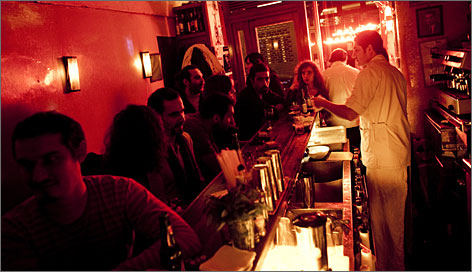 Seize the night: Clubbers party at Bubbles, the outdoor lounge on the rooftop of the Palm Beach Hotel on Beirut's Corniche, or seaside boulevard. Beirut is renowned for its rooftop nightclubs, where the young and beautiful flock every evening. By Bryan Denton for USA TODAY

Hotel guests will find a heady mix of cultures and religions — European flavor, French colonial legacy and Middle Eastern intrigue in arguably the most tolerant city in the Arab world. In this pluralistic society with 18 religious groups — primarily Muslims and Christians — one’s religious affiliation defines one’s politics. “My identity is my religion first, and Lebanese, second,” says Rita Aad, who works for a foreign embassy.

The mosaic can be disorienting: Mosques sit cheek by jowl with churches and monasteries. Image-obsessed women in revealing outfits — some showing off their nose-job bandages — stroll alongside women covered from head to toe. The muezzins’ lilting call to prayer mingles with European techno blaring from passing cars. And the trilingual locals are apt to greet each other in a mélange of Arabic, French and English while cheek-kissing — three times, no less.

Indeed, layers of history reveal a Roman bathhouse, St. George’s Greek Orthodox Church, the landmark Mohammed al-Amin mosque and showpieces from the Ottoman and French Mandate eras. To reconcile Beirut’s brutal past — the city has been destroyed and reconstructed seven times — Solidere is creating a Garden of Forgiveness and an interpretive heritage trail that’s due this spring.

New buildings are going up, too. Traditional souks have been reborn as a modern open-air mall lined with designer stores. In the new Sayfeh Village, the moneyed live in chic pastel condos surrounded by antique shops and galleries.

“Beirut bounces back quickly,” Gavin says. “It’s an extraordinary characteristic of the Lebanese, like a life force.