Beirut is in the Eye of the Beholder: Paint is on everyone’s tongues! 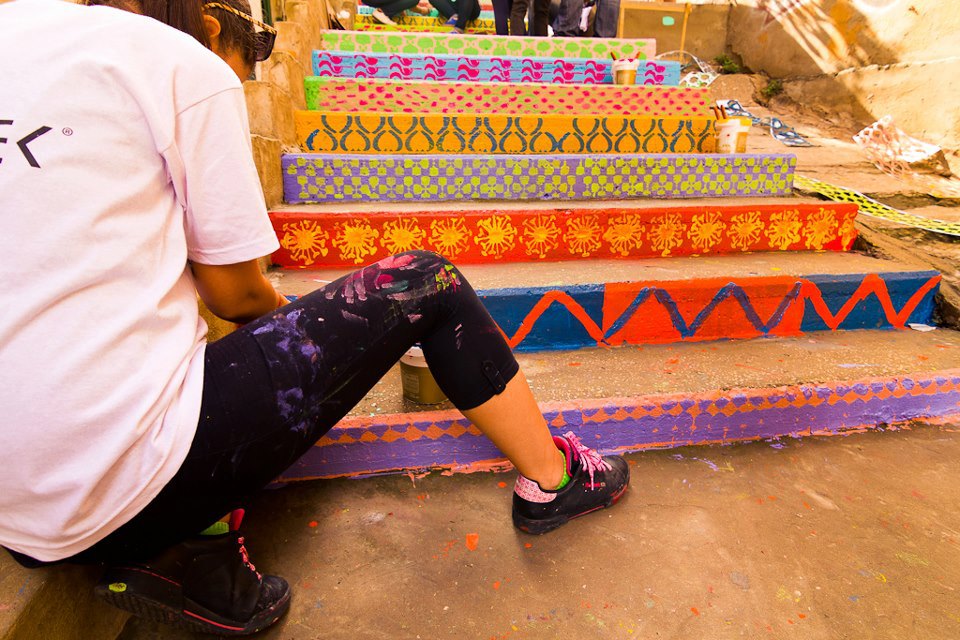 Well, maybe not quite their tongues, but “Paint Up” has been talked about on blogs, news websites and televisions all over the country—it was even featured by BBC this month!

While Beirut is kind of a grey city, the Lebanese people are a colorful bunch—and we love to start things up. We all love to complain, moan and blame the politicians, but there are some who are being proactive about finding solutions to the problems that bother them the most. 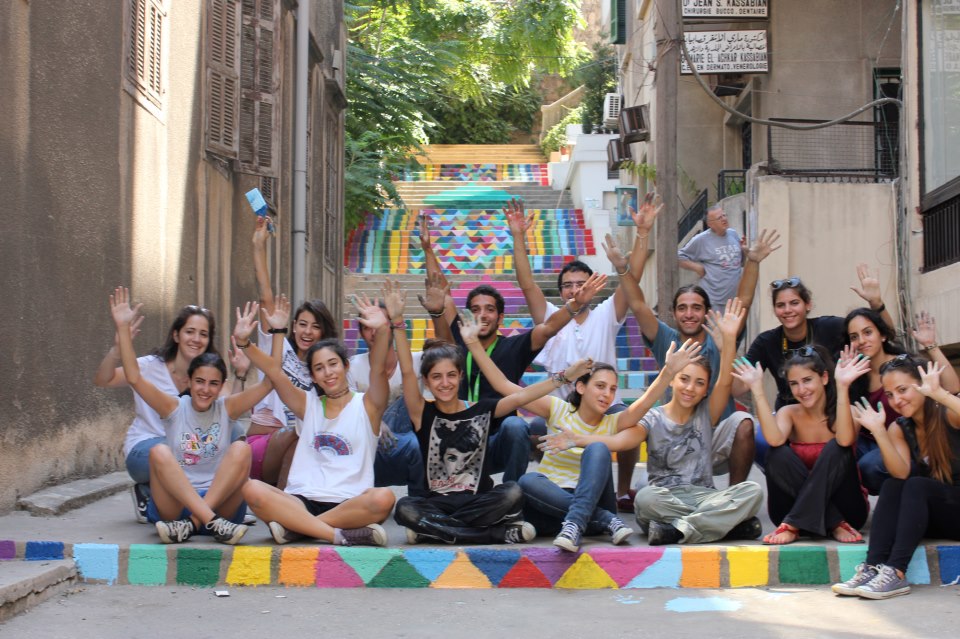 A bright and inspired few have taken matters (and paintbrushes) into their own hands. Paint Up is a community initiative that was conceived in the minds of a collective of young change-agents, most of them Graphic Design graduates from LAU. After seeing an inspirational photo of colorfully-painted stairs on the streets of Germany, the activists (calling themselves the Dihzahyners) decided to step up and Paint Up. The bright initiative was born in March 2012 and made a vibrant and astounding splash on the stairs of the Sakiet el Janzeer. Paint Up aims to brighten up the many stairs that are dotted throughout Beirut—using their own winning recipe: love-of-color, artistic skill, lots of paint, and a double dose of sheer drive to make a difference.

So with so many bigger problems in the country, why should anyone care about a little bit of color? “A more beautiful atmosphere to live in, makes for a more beautiful society to live in,” explain the activists, who prefer to be known as a collective, and not as individuals. “If we can change our surroundings, we can ignite change in people’s overall feelings, and eventually even their behavior, towards each other and towards their country!” Now that’s something to be inspired about! 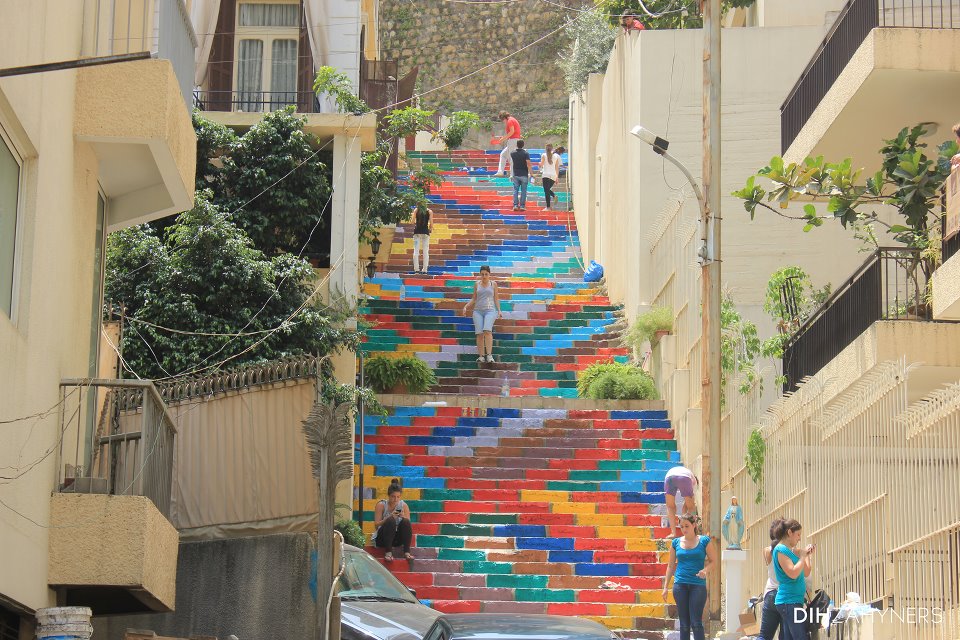 Over the past few months this rainbow revolution has colorized 5 stairs in Beirut city—from Bliss to Mar Mikhael—and there’s more where that came from. With each event, the number of volunteers has increased and the designs have become more elaborate. The first stairs were just painted in block colors, but since then the Dihzahyners have painted piano keys, patterns, and other creative designs.

They are going about it professionally and respectfully too—asking residents for approval and input on designs before changing their neighborhoods, and of course getting permission from municipalities before proceeding. And it takes some serious effort. Most of the stairs have taken 7 straight hours to paint, with one taking even longer.

The energy to go through with this many projects (remember, these lively heroes also have day jobs!) comes from one another, from pushing and encouraging each other as a team. “One of our main ideals is that nothing can be built without working with a dedicated, aspirational team that shares the same vision and passion,” they say in one voice. 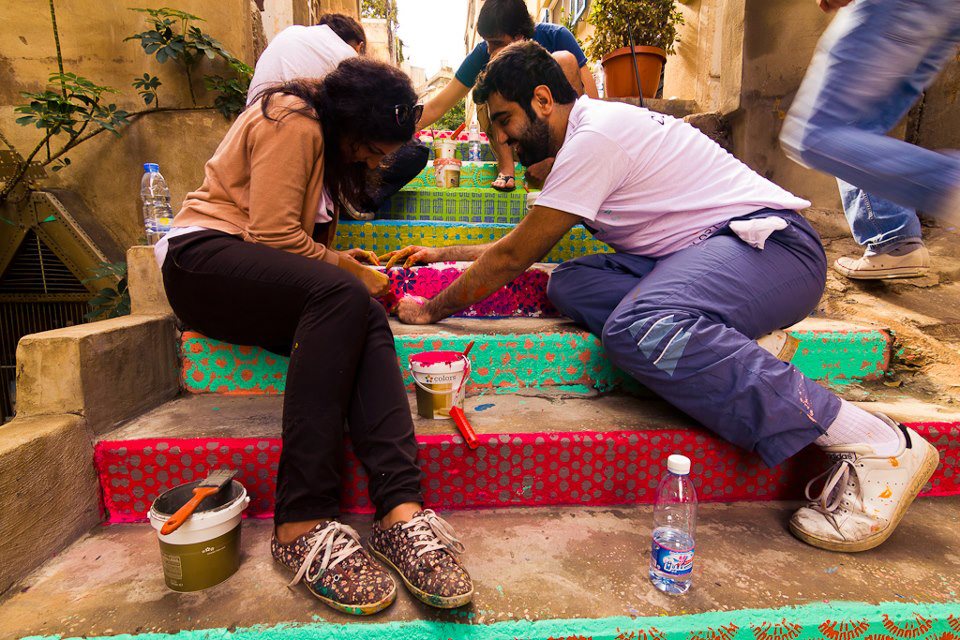 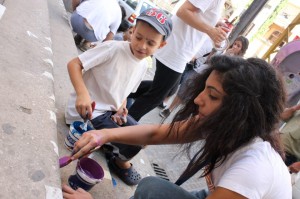 So what are the reactions? In short: “Reactions have been incredible!” Residents are ecstatic that someone cares, someone is paying attention to them, and making a much-needed positive change in their formerly dull and grey streets. People are always coming down from their houses to help the gang and provide beverages, blessings and good vibes. The neighborhoods’ visual transformations have impacted the greater street-art culture of Beirut and are bringing back some character to a city that is sadly seeing the rise of too many lifeless towers and the fall of too many historically significant buildings. 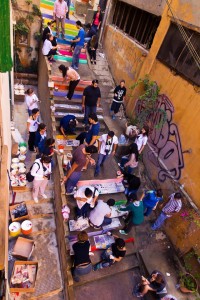 So what does the future hold? Well, the Dihzahyners plan to continue spreading color and brightening up the city. That includes, but isn’t limited to, stairs. They recently had an art display at the TEDxBeirut talks and have been contacted by universities, schools and other organizations for other projects in the near future. “We think every area in Beirut needs attention and are trying to branch out as much as possible. We come up with the themes as we go along and according to areas, people’s opinions and so on… so we’ll see,” they explain. They want to continue expanding—and dreaming big!

I had another question, regarding longevity. What would happen after winter rains sweep through Beirut? Would the paint be washed away or the designs damaged? But the diligent Dihzahyners have already thought about that. They use industrial, long-lasting, watercolor-based paint but have plans to renovate whatever does get eroded. They’re planning for a mini face-lift for their very first stairs soon, to make sure they stay as beautiful as they were on the day they were reborn. 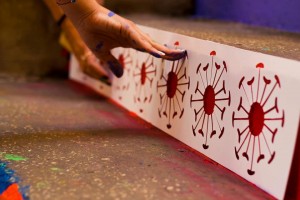 The Dihzahyners have received tremendous encouragement from their
sponsors, who believe in the vision and offer material support to keep the initiative going, as well as the fans and supporters who give them a reason to continue growing. “They send us emails, pictures, ideas… We’ve even hosted a couple of people who came from abroad and we took them out and showed them around because they wanted to spread the news about us in their countries. This all gives us the drive to find the energy for our initiatives!”

They say “beauty is in the eye of the beholder”, and now it’s also on the streets of Beirut. What a refreshing revolution! Next time there’s an event grab a paintbrush and help Paint Up the city… Yalla! 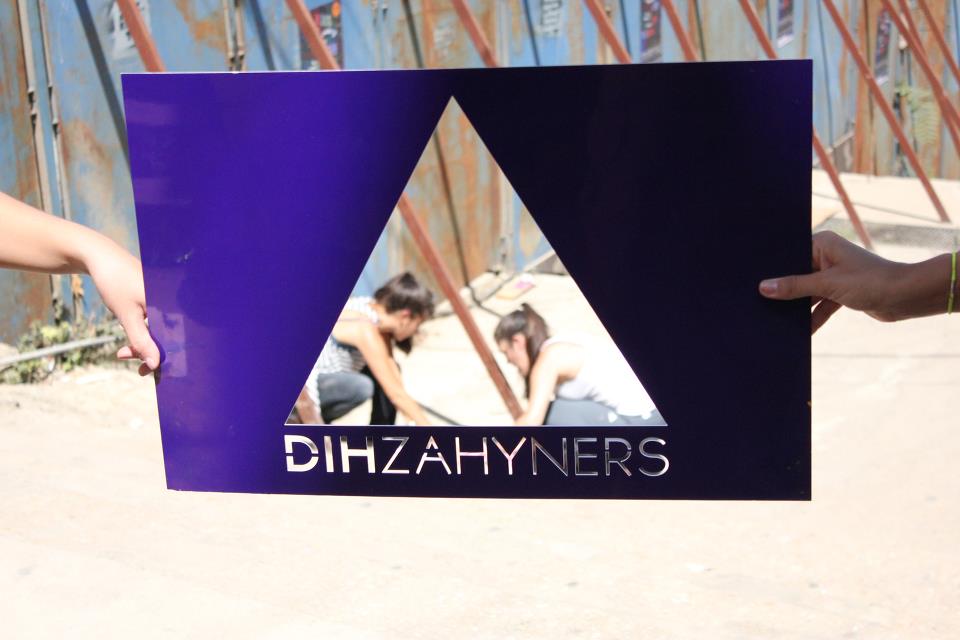 (All photos courtesy of Dihzahyners)