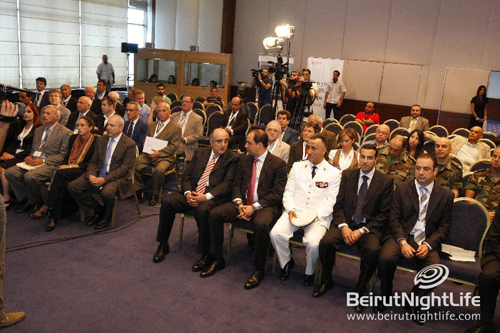 The second day of Beirut Boat 2010 was marked by AMIA’s conference- (Arab Marine Industries Association)- held at Le Royal Hotel, Dbayeh under the Patronage of the Ministry of Tourism, sponsored by the Ministry of Environment & in collaboration with the Directorate General of Land and Maritime Transport.

The event was attended by HE the British Ambassador to Lebanon Mrs. Frances Guy, HE the Spanish Ambassador to Lebanon Juan Carlos Gafo, HE the Minister of Tourism Fady Abboud and HE the Minister of Environment Mohamad Rahhal. Were present especially for the event too, Colonel Tony Haddad (representing the Lebanese Army Commander Jean Kahwaji), Mr. Abdel Hafeez Al Kayssi (the Director General of Land and maritime transport) and General Samir Yazbeck (representing Darwish Hobeika Director General of Lebanese Civil Defense).

A maritime conference of scale that brought together international trusted references and industry experts, the event acted as an academic/economic platform where participants debated, exchanged and engaged ideas pertaining to the challenges and opportunities of current sea-front developments, Marinas and many other interesting topics.

The first speech was given by H.E the British Ambassador Mrs. Frances Guy : “I am here today as a representative of an island state, a state whose wealth was built on its understanding of the oceans and the importance of protecting and developing its marine environment for the benefit of all. The last British government has put into law the Marine and costal access act, designed to create a new system of conservation areas that create new strategic marine management organization, providing better access to the coast.”

And added: “the costal zones in the Arab world are under stress as a result of demographic shifts from rural to urban areas, land filling, and of untreated waste dumping. The Marine environment is increasingly threatened by land based sources of pollution and by the heavy ship traffic in the region. We need to consider the wealth of the sea itself. The ecosystem is vital to us to supply food and medicine”

And concluded: “The European commission’s research has spared a budget to develop and share knowledge of environmental issues relevant to the Mediterranean. Moreover, the European investment bank has created a Mediterranean hotspot investment programme, with opportunities for all countries on the Mediterranean to Benefit. Lebanon has only 4 projects on-going in this field while other neighboring countries have 10. It is time to take action and preserve the marine environment now that the Lebanese government and economy are finally stable”.

From his side, HE Minister of Tourism Fady Abboud went along the same lines saying that: “it is true that we face a lot of challenges & obstacles on the Lebanese coasts but we remain positive. We enjoy an advantageous geographical location and our Arab friends favor the shores of Beirut amidst all its neighbors. We are working for the development of our Marinas and the preservation of our seas as tourism is vital to our economy”.

HE the Minister of environment Mohamad Rahhal said: “Many of our environmental problems go back to negligence; if the issue of waste management is not properly addressed, grave consequences on the economy and tourism sector will occur in Lebanon. We believe in action and are now issuing regulatory decrees to activate the work of the ministry”.

Mr. Edward Aoun, AMIA’s Secretary General addressed the attendees: “Aside from the recreational spirit of Beirut Boat 2010 that sets the tone for a zestful Lebanese summer, AMIA’s conference adds to the show an academic, informative and educative perspective, as serious matters are explored in depth. We started our operations officially in 2002 and we are committed to actively engaging in the marine industry and maritime services in Lebanon and the Arab World.”

And to add: “This fundamental gathering assembles professionals & leaders in the marine industry, representatives of local and foreign maritime and tourism companies, clubs and resorts, marinas, and media institutions. A multifaceted organization that goes far beyond the business spectrum to act as an economic catalyst for growth as is scheduled”.

And to conclude: “AMIA was asked by its board members and the major players of the maritime industry (after 3 years of absence from any public activity) to organize its annual get together in conjunction with Beirut Boat 2010, the largest boat and yacht show in Lebanon, organized in partnership with giant German Messe Dusseldorf. Our conference will stress on the need to develop eco-friendly marine activities and industries, by ensuring the integrity of the territorial waters; moreover, we urge the public entities to adopt new measures in regards to maritime activities regulations, on top of highlighting the economic benefits resulting from sound sea front developments, in Lebanon and throughout the Arab World.”

Both Abboud & Aoun stressed on the unexplored capabilities of the coastal areas in the Arab world and the crucial roles that marinas play by creating local businesses, thus adding to the host country a touristic value. In fact, marine tourism and private boats remain one of the most important components of tourism in Lebanon, especially that Lebanese marinas are full.
They also stressed on the need of building new ones that can accommodate yachts and boats- small, medium and large- leveraging on Lebanon’s natural, religious, cultural archeological, lifestyle, medical and health tourism.

The AMIA seminar featured a schedule filled with interactive participations, case studies and educational speeches relating to marine development and in support of “green developments” in regards to sea front improvement.

Five crucial personas shared with the attendees their topics at the conference that was divided into two sessions. The first comprised of Mr. Dan Natchez- president of DANIEL D. NATCHEZ and Associates, INC- who addressed “The opportunities and Challenges of Waterfront Development within the Middle East”; Mr. Abed El Hafiz Al Kayssi; the director general of Maritime and Science and Technology Institute, he talked about the “Governmental Legislation for Maritime Activities and Border Crossings”, Mr. Jean Pierre Lavail; Lavail Consultants, focused on “ Coastal Development in Al FAYHAA” and lastly, Mr. Oscar Siches; Marina Consultant and member of ICOMIA, his speech was about “Forgotten matters in marinas environmental control”.

The second session started with Mr. Gaby Khalaf; the Director of Marine Research Center/ CNRS Lebanon, by emphasizing the “Impact of Antropic activities on the Lebanese Coast: Strategy for Sustainable development”, followed by Mr. Peter Jansen; IMC Secretary/ urban aqua who talked about” Marine Design”, Mr. Ulrich Manigel; International Maine Certification Institute, he spoke about “IMCI’s Blue Star Marina Certification” , Mr. Michael Horrigan (IGY); Mourjan Marinas IGY, his speech topic pertained to “ The Increasing role of Marinas in the Middle East for integrated Lifestyles, where the boating facilities are designed along with public spaces and commercial upland components” and last Mrs. Elizabetta Francesia; Planning Group coordinator (Studio Passion Associato GSI, Ai Engineering) and Mr. Pession Carlo; engineer, both engaged in a speech that is highly regarded these days- the “Green Marina”. The conference ended with a VIP lunch, a workshop and a Q&A session to enhance visitor/speaker collaboration and interaction.