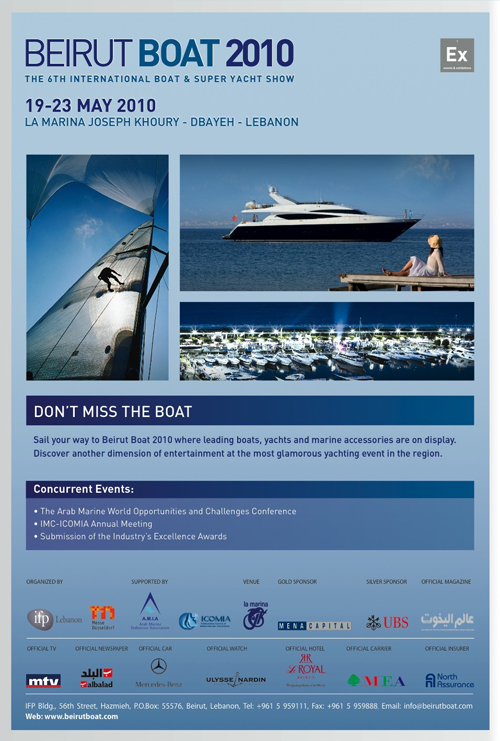 Despite the global financial slowdown, Lebanon has emerged as one of the few positive stories in 2009 with remarkable economic growth. Thanks to its smart financial regulations & buoyant hospitality practice, Lebanon’s tourism sector has achieved dramatic growth. The number of arrivals totaled 1, 85 million at the end of 2009, generating around 9.3% of the country’s GDP and accounting for more than 9.6% of total domestic employment in 2009.

Moreover, Beirut has topped the global list of “The 44 Places to go” published recently in the New York Times: the upbeat Lebanese capital edged out popular tourist destinations such as Washington, DC, Galapagos, Las Vegas and Hawaii by garnering consistently high ratings in all criteria, which included Luxury, Ecology, Family, Frugality, Food, Culture, and Party.
This buoyancy in the tourism sector has positively impacted the yachting industry which achieved a significant +14.5% surge in sales in 2009 and is projected to reach some +20% in 2010.

Organized by the Middle East’s Leading Trade Fair Organizer in partnership with world famous Messe Dusseldorf, Beirut Boat Show 2010 will cement Beirut’s reputation as the Luxury Capital of the world.

With its famous sunny days, crystalline sea water and perfect wind conditions throughout the year, Lebanon, on the eastern shore of the Mediterranean, remains the ideal location for such a show. Hosted at La Marina Joseph Khoury Dbayeh, from May 19th to 23rd 2010, the 6th edition of Beirut Boat entirely devoted to yachts, super-yacht and mega-yachts is the only show dedicated exclusively to water sports in Lebanon. New and experienced yachters from throughout the world are set to gather at this one place to view, board, buy, save and enhance their boating experiences.

With special deals on everything from sport fishers, sailboats, to engines and the newest electronics, the Beirut Boat Show 2010 is a multifaceted business and leisure platform hosting the “Crème of the crop” of the industry.

Aside from the water and land based exhibitors, a main stage will be the setting for interviews, fashion shows, media boat party, coffee lounge, VIP exclusive lounge and a premium wet Bar, in addition to plenty of activities boaters of all ages will enjoy.
Beirut Boat Show 2010 is expected to attract thousands of international participation and VIP visitors gathering from the Levant, MENA & GCC regions.

Officially supported by the Arab Marine Industries Association (AMIA), Beirut Boat 2010 will host the association’s Annual General Assembly Meeting and its 3rd International conference. Moreover, IMC http://www.icomia.com/members-info/committees/imc.asp ICOMIA Marinas Committee  is scheduling its annual meeting- in conjunction with the Beirut Boat show-for exchanges of knowledge and expertise in fields ranging from Marina Management, sailing and other marine activities to licensing & more. Hence, this will attract an even bigger number of decision-makers from regional governments and maritime authorities that will share & receive insights on issues and trends affecting the industry.