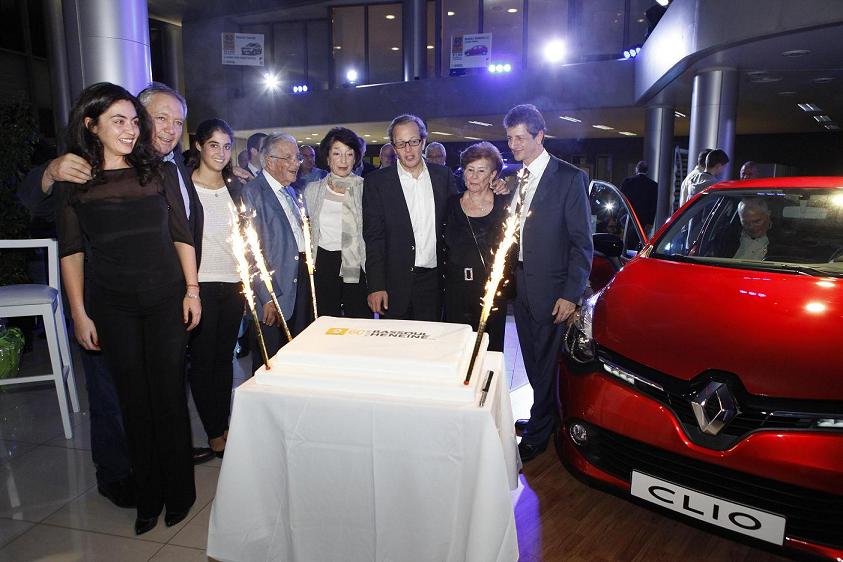 60 years have passed since Bassoul-Heneine first embarked upon a journey of importing Renault vehicles to Lebanon. To celebrate this momentous occasion the company celebrated in style at Bassoul-Heneine SAL Head Quarters in Beirut.

Bassoul-Heneine is the second oldest Renault car dealer in the world. The journey began back in October 1951 when Mr. Louis Bassoul, the father of Bassoul-Heneine‘s present General Manager Albert Bassoul was invited to France to meet with the then President of Renault Pierre Lefaucheux in order to sign a deal to operate a Renault agency in Lebanon. On October 24th, 1952 Bassoul-Heneine was established in Lebanon and a long and successful journey began.

60 years later in 2012 the company boasts a number of car brands in its extensive portfolio. Apart from Renault, its portfolio comprises BMW, MINI, Alfa Romeo and Dacia, with iconic Rolls Royce to be the latest arrival at the beginning of 2013.

“It all began in the St Georges’ area near the Phoenicia Hotel,” said Bassoul-Heneine’s General Manager Albert Bassoul. ‘We relocated shortly after to the present showroom in Ain el Mreisseh Beirut. The years until 1975 were a great success and were able to build solid foundations to develop the company.”

The first Renault model to be imported was the Renault 4 CV (Renault Juvaquatre) in 1952. Subsequent models were soon added: Renault 8 and 8 Major, Renault 10 and 10 Major, and the hugely successful Renault 16, 12 and 5. Sports models were also added to the list: Dauphine Gordini plus the Caravelle and Floride convertible, as well as two variations of the same coupe, Renault 12 and 17.

Louis Bassoul journeyed to Germany in 1955  and returned with new BMW models, such as the Micro Isetta, 501, 502, 503  and 507, the latter being, according to Albert Bassoul, a luxurious sport car that is still appreciated to this day. “By 1959/60, Alfa Romeo had also become part of the company,” added Bassoul.

Today Bassoul-Heneine is the leader in LCV Sales for Lebanon during the years 2010, 2011 and 2012, and revealed four new car models at its 60th year celebrations, to add to its already burgeoning portfolio: the Renault Clio, Fluence, Megane and the Dacia Lodgy.

Albert Bassoul cites the company’s success to its implementation of the After Sales Service and the quality of the cars stocked, as well as “…constantly reaching for excellence.” However the 60 year journey has not always been easy.

“The Civil War years were an unimaginable nightmare,” he says. “At the outbreak of war I was just 31 years old and we were selling approximately 5000 vehicles. We were faced with many challenges through those dark days but as a family – Father, Mother, Uncle and I – we failed to give up or to give in. We faced the challenge through efficiency and refused to close the company throughout the war.”

In the Modern Era of Bassoul-Heneine, the Renault 18, 19 slowly moved to newer models such as the Laguna then to the Mégane, while the Clio took on the heritage of the hugely successful Renault 5.

Today Bassoul-Heneine HQ is 32,000m2. There is the showroom in Ain el Mreisseh, as well as an extensive network of Renault agencies, whom Bassoul-Heneine and support.  Speaking of the company’s success, Bassoul said, “The vehicles that we offer are well positioned within their segment, in terms of excellent quality and price. We work hand-in-hand with Renault, BMW, Mini, Alfa Romeo and Dacia, who all support us at each and every level.”