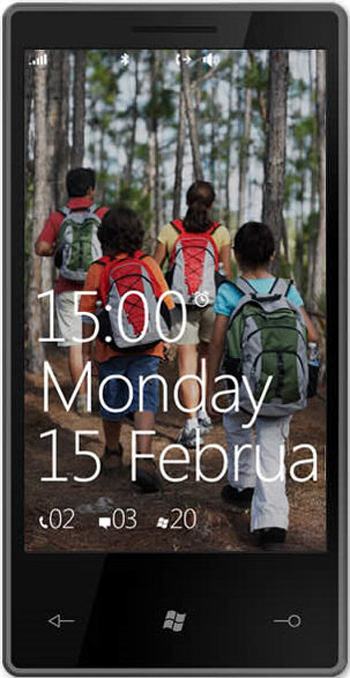 On July 19, Microsoft will begin shipping preview devices — from Samsung and LG — to developers so they can begin real-world testing of their apps before the big holiday-season launch. We got a few days with one of these devices to take Windows Phone 7 for a test drive.

This isn’t final software, so some services, such as Windows Marketplace and Xbox Live, weren’t available for testing. In addition, Microsoft revealed that it is continuing work to improve general performance and battery life. Last but not least, the handset used, the Samsung Taylor, is only a prototype device and will not be released to market. It does, however, meet the hardware specifications that will be required on all Windows Phone 7 smartphones, including a 1GHz Snapdragon processor and the three navigation controls (Back, Start and Search).

The Start screen and apps menu might have left us a little lukewarm, but we were heartened by the platform’s ‘hub’ system. The idea behind hubs is to bring together related content into a single place for consumption and interaction, and it really showcases some of the work Microsoft has done on relevancy, organisation, elegance and typography. There are six hubs in total: People, Pictures, Games, Music + Video, Marketplace and Office.

The names of the hubs are pretty self-explanatory. For example, the People hub merges contact information from your various accounts and then displays them in one long list. A swipe to the right will show you Facebook status updates (unfortunately, Windows Phone 7 will not have Twitter or MySpace integration at launch) and lets you add comments, while another swipe will brings up the people you’ve contacted most recently.

This type of panoramic UI runs across all the various hubs with bold, attractive text splashed across the top to identify different subsections (a.k.a. Pivots) and in some cases, a small contextual toolbar along the bottom of the screen to help you perform app-specific tasks.

Some might complain that this type of navigation requires too much scrolling and can be overly complicated. Admittedly, this is true when compared to Apple’s iOS 4 and Google’s Android, and may be a turn-off for consumers. On the other hand, we appreciate the ability to do so many things from one place without having to launch several different apps, so we have to give Microsoft kudos for thinking of this kind of organisation. We also like the consistent UI, which makes it easy to work the other hubs.