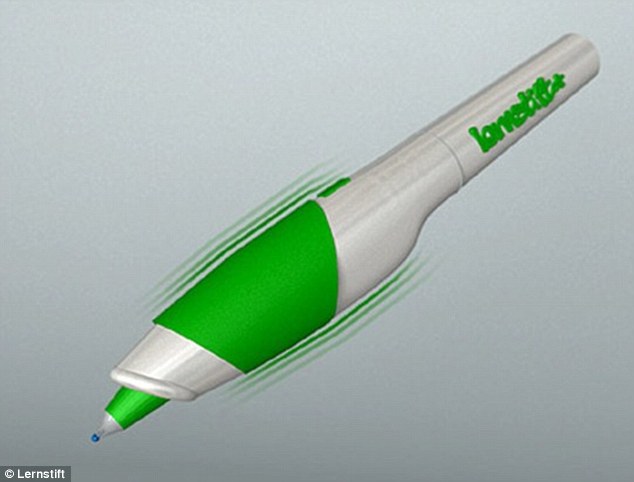 Using pen and paper to write can be a daunting prospect for many people nowadays.

Without the safety net of the trusted computer spellchecker some of those embarrassing spelling errors may just slip out.

But now help is literally at hand in the shape of hi-tech pen which vibrates every time it senses an mistake.

It is designed by German company Lernstift to help youngsters learn to write, but could catch on with people of all ages.

The pen, which is at the prototype stage, is capable of picking errors in spelling or letter formation in real-time, delivering a warning vibration to the writer’s hand.

Users can choose between two functions: Calligraphy Mode – pointing out flaws of form and legibility or Orthography Mode – detecting orthographic and grammatical mistakes.

Sensors built into the pen detect variations in the way letters are formed and buzzes immediately if an error is spotted.

Creators Falk and Mandy Wolsky were inspired by their son’s early writing attempts, according to their website Lernstift.

They explain on their company’s website: ‘From the very first words there were errors.’

It is hoped the quick prompts will help children learn to write more accurately, more quickly.

The inventors will launch a crowdfunding project, financed by donations from the public who support the concept behind the invention, during February, 2013 to raise money to develop and market the idea.

Proposed improvements for future pens include adding pressure sensors, computer connectivity and an open platform to allow others to develop apps and expand the functionality of the pen.