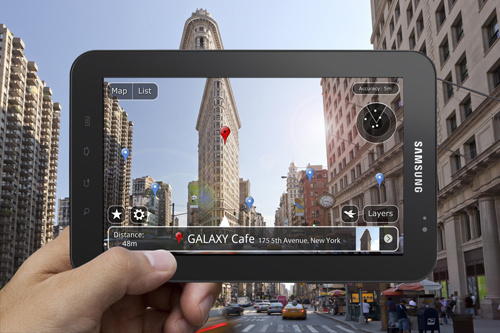 The final specs have now been revealed for the Samsung Galaxy Tab. It’ll run Android 2.2 (Froyo) and comes in a 7-inch flavor—for now.

The back-facing camera is a 3MP affair with auto-focus and an LED flash, and the forward-facing one (for video conferencing) has a 1.3MP sensor. In some of Samsung’s comedy lifestyle photos below, you’ll see that back-facing camera being used for the Layar app. I’m not sure it’s going to be any more convenient than using your phone, but it’s most certainly a welcome addition.

Two storage capacities are on offer, either 16GB or 32GB, with both models allowing for a further 32GB memory expansion via the card slot.

Several connectivity options have been included, such as Wi-Fi 802.11n and Bluetooth 3.0, and 3G support should a user want to use data with one of the supporting carriers (Vodafone has been signed up from the get-go.) There’s a 30-pin connector port, similar to what Apple uses for its gadgets.

The one elephant in the room is the fact that Samsung’s slicked its TouchWiz UI on over the top of Froyo. I’m not a fan of it on their phones, but will wait until a hands-on session with the tablet before I pass judgment on its usage here.

With the Galaxy Tab on sale in Europe mid-September, and the US/other areas of the world later in the year