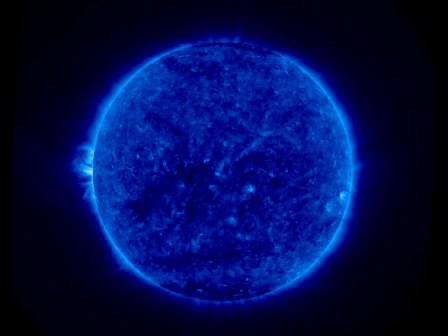 Scientists have been baffled by a mysterious phenomenon that hinders a NASA spacecraft from moving further into outer space and defies all previously-established theories about the universe.

The mysterious force that gently pushes spacecrafts away from outer space was discovered last year when the spacecraft Pioneer 10 launched by the National Aeronautics and Space Administration (NASA) since 1972 was stopped in its path by an unknown phenomenon.

Egyptian space scientist Farouk al-Baaz, who worked with NASA and is currently Research Professor and Director of the Center for Remote Sensing at Boston University, said that this force could be a totally new phenomenon that does not fall under the familiar forces in outer space like gravity and electromagnetic power.

“That is why it is too early to identify this phenomenon,” he told Al Arabiya in a phone interview from Boston. “We have to find a tangible scientific explanation.”

Baaz explained that scientists started noticing the phenomenon when Pioneer 10, which travels more than one million kilometers per day, started slowing down in an area where it is not supposed to meet any obstacles.

“Pioneer 10 left the solar system and started its voyage in a space where there are no planets to attract it towards their orbits. There is also no solar radiation since it is far from the sun.”

Pioneer 10 is the first spacecraft to take close photos of Jupiter, by which it passed in 1973. In 1978, it traveled towards Pluto and reached it in 1983 then left for a region called the Asteroid Belt, which is occupied by several irregular-shaped minor planets and where it was not hindered at all in its path.

Afterwards, Pioneer 10 left the solar system carrying plaques with a picture of a naked man and woman attached to its antenna in order to familiarize any extraterrestrial beings it might encounter with the inhabitants of planet earth.

The rate with which Pioneer 10, which is currently 11 billion kilometers away from earth, started slowing down is remarkably low since it does not exceed 25 centimeters backwards every day, compared by scientists to a drop lost from a river.

However, this slowing down was very significant insofar as it revealed the presence of this nature forces that pulls the spacecrafts backwards.

Slowing down is not the most astonishing of incidents that happen to spacecrafts, Baaz points out.

“During my work at NASA, I have encountered so many surprises,” he said.

He cites the example of one of the astronauts on Apollo 13, launched by NASA in 1971, and who spotted a three-meter long metal body that traveled in a direction apposite to the spacecraft despite being close to it.

“This is in contradiction with all known space theories since this body was supposed to travel in the same direction as the spacecraft. Till now, we haven’t found an explanation for that.”

When asked about the possible reasons for hindering pioneer 10, Baaz replied that it could be a problem with the computer program that tracks the trajectory of the spacecraft.

“Otherwise, it is a force that defies all laws of nature. In this case, all the information we have about the universe and gravity laws need to be changed.”

The most striking fact Baaz revealed is that Pioneer 10 will need billions of years to come to a complete halt if the slowing down rate remains as it is.

“If it doesn’t slow down at a higher rate or if it doesn’t pass near a planet or a star that attracts it to its orbit, it can stay like this for ages.”

Baaz explained that while objects on earth can stay for thousands of years at most then becomes extinct, outer space is different.

“Outer space is devoid of atmosphere layers whose components play a role in the ravaging and deterioration of objects on earth. Earth is an example. It has been in outer space for 5 billion years. The solar system is the same since it has existed for almost 11 billion years.”

Since its discovery, scientists embarked on an expansive investigation of the nature of this unknown force and came up with a study to be published in The Physical Review and which stated that all theories about the universe could be refuted by this force.