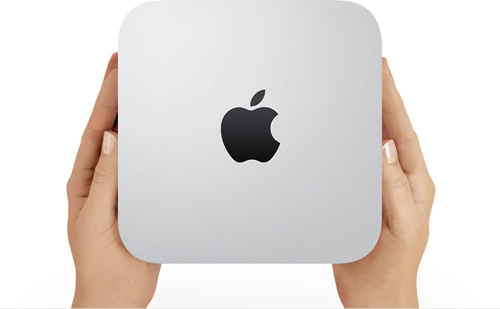 With its sleek aluminum design, a removable bottom panel for easy access to memory, and a space-saving built-in power supply, Mac mini is pretty incredible. No matter how you look at it.

Mac mini features an all-new, 1.4-inch-thin aluminum enclosure. It’s called the unibody — a seamless enclosure carved from a single, solid block of aluminum. The unibody construction was originally developed for Apple’s MacBook Pro. It’s created using computer numerical control, or CNC, machines — the same kind used by the aerospace industry to build mission-critical spacecraft components. This ensures absolute precision of every component of the Mac mini enclosure. Not to mention a stunning aluminum fit and finish that will make any desk proud. 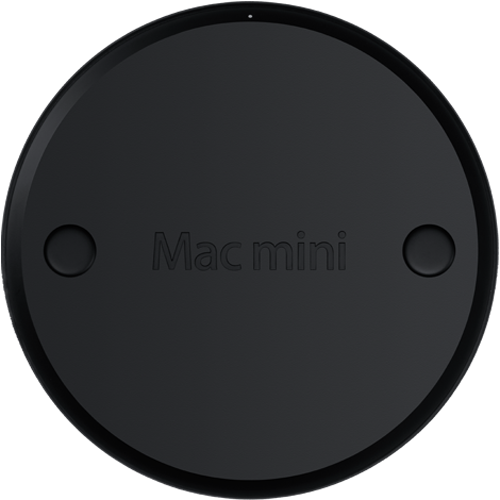 Size wise
It makes the most of every micron.
You may notice something missing from this Mac mini: the power supply. Actually, its power supply is built in. So there’s no bulky brick, and there are fewer cables to connect. Which means Mac mini takes up even less space than before. A removable panel on the bottom of Mac mini makes upgrading the memory virtually painless. And once you’re inside, you’ll see how clean and organized Mac mini is. With attention paid to the tiniest detail. Like the air intake and vents. They’re practically invisible. And when the fan is running, you’ll barely hear it. It’s kind of surprising how so much fits into something so mini.
Many ports. Major possibilities
Now Mac mini makes it easier than ever to hook up to an HDTV or digital display using the HDMI port and Mini DisplayPort. There’s also a built-in SD card slot so you can grab photos and videos from your digital still or video camera. And even though Mac mini is ultracompact, there’s no shortage of ports. Which means the possibilities are endless. When you connect your peripherals and devices to Mac mini, you’ll notice that even the back has been carefully considered. And on the front of Mac mini is the fast, slot-loading SuperDrive for playing DVDs and CDs — or burning your own.

The world’s most energy-efficient desktop computer
What Mac mini doesn’t do could be its biggest feat. It doesn’t waste energy. When Mac mini is idle, it consumes less than 10 watts — a 25 percent reduction from the previous generation.* No other desktop computer does that. Mac mini is made from highly recyclable aluminum. And its redesigned, lighter package makes it more efficient to ship.