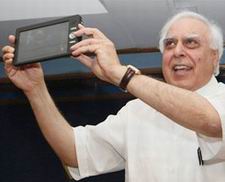 In another attempt to bring a usable computer to the masses at an extremely affordable price point, India has developed a touchscreen computing device which will cost only $35. According to a press release by India’s Press Information Bureau, the price is expected to drop even further, first to $20 and ultimately to a mere $10.

The reports about the device’s hardware vary greatly; all we can say for sure is that it’s portable and has a touchscreen, which pretty much makes it a tablet (confirmed by the image on the right).

According to Indian Express, it has a 5/7/9-inch touchscreen (we don’t know whether that means there will be several versions of the device or they’re simply unsure what the actual size is, but it looks like a 7-incher to us), and, on the software side, it sports a web browser, PDF reader, office software, media player, multimedia input/output capabilities, video conferencing (it must have a camera, then) and remote device management capability — all of it open-source and Linux-based.

Whatever hardware is running this thing, it’s ready for production, according to India’s Human Resource Development Minister Kapil Sibal. “We have reached a (developmental) stage that today; the motherboard, its chip, the processing, connectivity, all of them cumulatively cost around $35, including memory, display, everything,” he said at a news conference in New Delhi.

The device, Sibal said, should be available to consumers sometime in 2011.