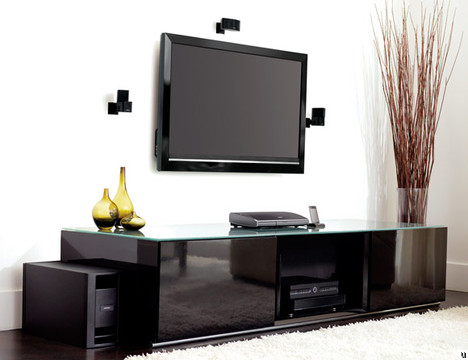 The magic of the VideoWave takes place within the 46-inch LCD display. Six compact subwoofers are concealed within the body and seven surround sound speakers are positioned behind its top bezel.

While the embedded subwoofers are cool, the feature of note here comes from the surround speakers and its “phase guide radiator technology.” Unlike typical virtual surround systems that simply create a perception of surround sound through some clever auditory tricks, the phase guide technology radiates sound off walls for actual, rather than virtual, surround sound.

The phase guide radiation is assisted by the Bose ADAPTiQ audio calibration system, which automatically adjusts sound settings based on the VideoWave’s location. The final result is a single display monitor with built-in speakers capable on hanging on your wall and delivering punchy sound. It’s no longer necessary to have speakers strewn about your living room, a benefit anyone who has ever tried to manually calibrate a home theater will appreciate.

Of course there are a couple of drawbacks. The display has only has a CCFL backlight instead of the LED backlighting found on most modern displays. I can only assume that this is a result of space constraints, stemming from the concealment of the entire subwoofer package within the display. That said, the display is 120Hz, so it’s not exactly antiquated.

The second drawback is that it comes from Bose, which is to say that it ain’t cheap. The Bose VideoWave System will set you back $5,350 when it hits Bose stores on October 14.