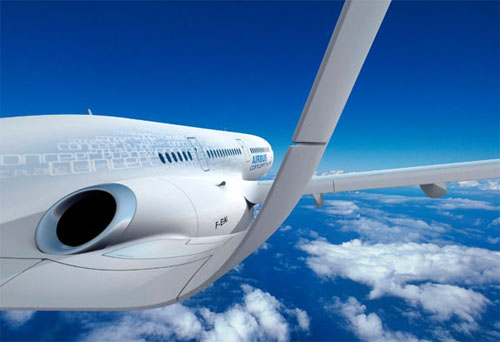 European aircraft manufacturer Airbus has come up with the idea to build a passenger flight with a completely transparent fuselage.

The central body of the aircraft will allow passengers to the see the stars above and city lights below.

“The planes of the future will offer an unparalleled, unobstructed view of the wonders of the five continents – where you will be able see the pyramids or the Eiffel Tower through the transparent floor of the aircraft,” Airbus said while unveiling the concept “The Future By Airbus” earlier this year.

The company talks of morphing seats made from ecological, self-cleaning materials, which change shape for a snug fit; walls that become see-through at the touch of a button, affording 360 degree views of the world below; and holographic projections of virtual decors, allowing travelers to transform their private cabin into an office, bedroom or Zen garden!

The transparent plane’s outer skin would be made of a special futuristic type of ceramic. The push of a button would send electricity flowing through the material, making the main body of the plane see-through, German news magazine Der Spiegel reported last week.

The aircraft cabins of the future will be made up of components that could have several different states. Materials of the future can include additional functionality that provides transparency on command, negating the need for windows.

This smarter structure would help to make the aircraft lighter and more cost-efficient while giving the passenger 360 degree views of the skies, the company said.

“Passengers in an airplane like this would experience flight in a completely new way,” Der Spiegel reported, quoting Airbus’ head of research and technology, Axel Krein.

“We told our engineers to give their imaginations free rein. What emerged were completely realistic visions of flight in the year 2050,” Krein said. “Our people are grounded in reality, after all. And most of the necessary technology already exists.”

The future passenger cabin will be ecological. No more nonrenewable materials like metal and plastic, but plant fibres, fully recyclable, that can be grown to the desired shape from responsible, sustainable resources, Airbus said.

Perhaps you would prefer a private cabin….that can turn into an office…..or a bedroom….or a zen garden? Or anything else you like, thanks to the projection of virtual decors. Holographic technology will have advanced to such a degree that the virtual world will be indistinguishable from the real.

So imagine, if you will, stepping in to your pre-selected themed cabin, relaxing into a perfectly clean, ecologically grown seat that changes shape to suit you and looking up through the transparent ceiling at the Milky Way in all its glory, at an altitude of 10,000 metres.