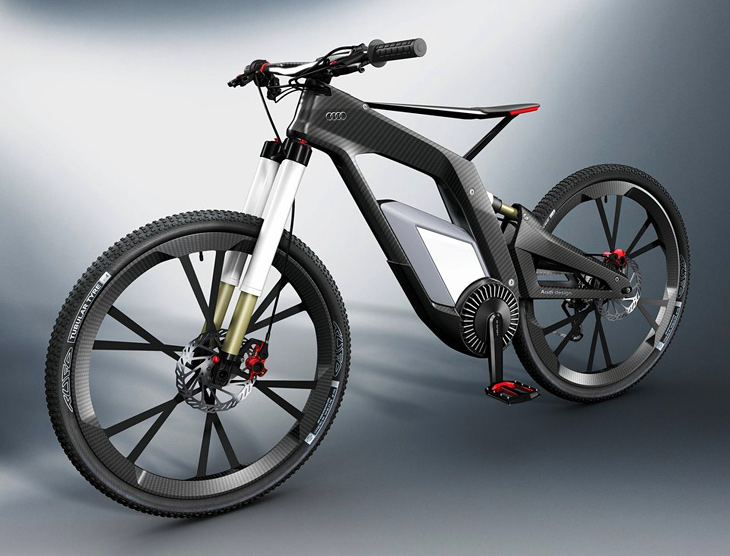 Audi used its presence at the 2012 Wörthersee Tour to show off the auto maker’s sleek electric bike concept — fittingly named the e-bike Wörthersee. The company claims the bike, featuring a lightweight 3.53-pound carbon fiber construction, has been crafted with “sport, fun, and tricks” in mind. It’s certainly one of the most advanced designs we’ve seen in terms of on-board tech, as the bike features a built-in computer complete with a touchscreen that displays a rider’s current road speed, distance, slope angle, and even lets them record trick sequences.

The e-bike Wörthersee can be powered in three ways: through manual pedaling, a combination of footwork and electric power (with speeds up to 50 miles per hour), or by relying solely on the electric motor, wherein speeds top out around 31 mph. Audi has also implemented two “Wheelie” modes that allow riders to cruise on just the rear wheel. And supporting the bike’s electric functions is a swappable 530Wh lithium-ion battery pack, which takes approximately 2.5 hours to charge according to Audi.

The prototype can also connect to smartphones over WLAN, letting users unlock its security system with their handsets, for instance. Integrated Facebook support allows riders to engage in trick challenges, with Audi boasting that the e-bike Wörthersee can post stunt data to your feed and provide worldwide rankings via its display. We’re now living in a world where you could soon be keeping tabs on social networks from a bicycle seat.