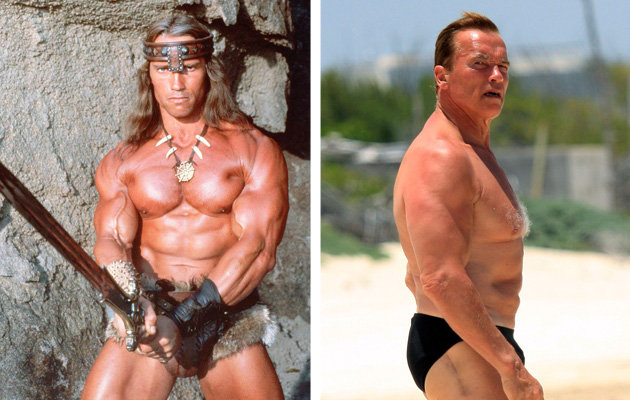 His last “Conan” movie was in theaters nearly 30 years ago. And judging from this before-and-after photo (above), it shows.

But the wear-and-tear that time and govornatorship has taken on Arnold Schwarzenegger’s physique hasn’t deterred him from reprising his leading role in the “Conan the Barbarian” series as the sword-wielding, headband-wearing warrior.

In the continuation of the franchise that launched his film career, it will be interesting to see what the older, more sage Schwarzenegger wears since his younger counterpart donned fur-and-leather undies… and often not much else.

The working title of the new film is “The Legend Of Conan,” according to Deadline,  and is set to be released in the summer of 2014 — that is, if writer-producer Chris Morgan finishes the seventh “Fast And Furious” script in enough time. (And if Morgan plans wisely, he’ll set the reboot in the dead of winter, in a cold region, to ensure Conan is fully clothed.)

“I always loved the Conan character and I’m honored to be asked to step into the role once again,” Schwarzenegger said (via Deadline).

We all know and love Schwarzenegger’s famous one liners from “The Terminator ,” but he also had some great zingers in both “Conan” movies. Here are some choice phrases uttered by the barbarian himself:

– [When asked what’s best in life]: “To crush your enemies, see them driven before you, and to hear the lamentation of their women.”

– “Grant me revenge! And if you do not listen, then to HELL with you!”

– [In response to Jehnna saying, “I suppose nothing hurts you.”]: “Only pain.”