Are You Ready for Guns N’ Roses in Beirut? 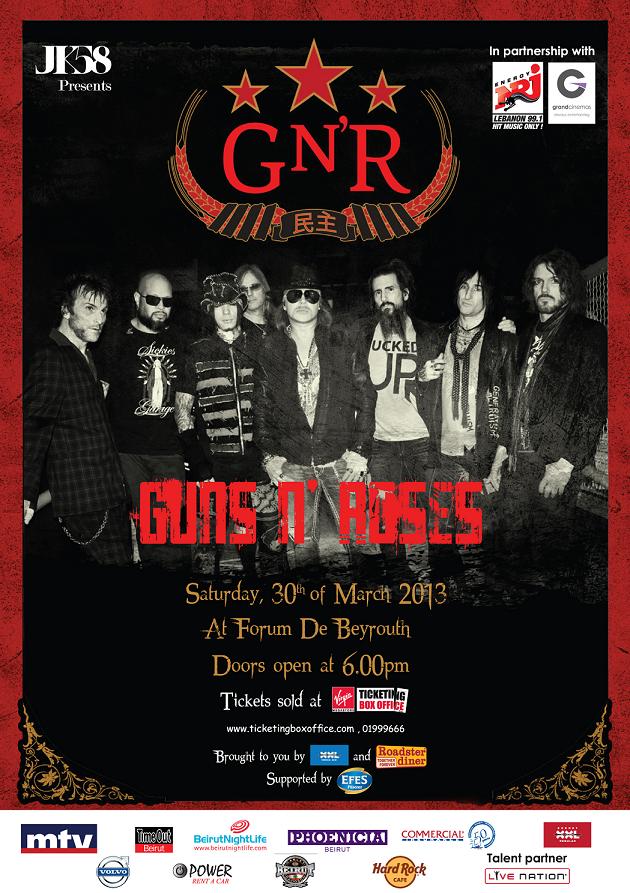 We’ve been waiting for this kind of historic moment for a long long time, and it’s finally here. JK58 is presenting the legendary Guns N’ Roses performing live in concert at Forum de Beyrouth on Saturday March 30th, in partnership with NRJ and MTV Lebanon.. The thrill of what is to come can hardly be expressed. All we can say is get ready to experience true rock and roll with one of the greatest rock bands of all time!

They’ve released six studio albums, and sold over 100 million albums worldwide, and they’re credited with reviving the mainstream popularity of rock music in the 80’s and 90’s when dance music and pop were taking over pop culture. Their hardcore rock star lifestyles and “hedonistic rebelliousness” earned them a reputation and reportedly the nickname “The Most Dangerous Band in the World”. The legendary Guns N’ Roses were induced into the Rock and Roll Hall of Fame in 2012, which is the first year they were eligible to enter it. Some classic GNR songs include Knockin’ on Heaven’s Door, November Rain, Used to Love Her, Civil War, Night Train, Sweet Child of Mine, Patience, Welcome to the Jungle, Paradise City, Estranged, Mr. Brownstone, and much more (check out the full list below).

This is the band’s first performance in Lebanon presented by JK58, in partnership with NRJ and MTV Lebanon. The concert in at Forum de Beyrouth  has seated and standing sections and you can get tickets at Virgin Megatore as well as online at Online ticket pre-sale at Presella. Doors open at 6 PM and the concert starts at 9 PM.

We absolutely can’t wait and are just wondering which songs they’ll be playing next Saturday night, but we’ll find out soon enough! This highly anticipated night will be memorable and epic and definitely go down in history. Be part of that history!

1-Welcome To The Jungle

1- Right Next Door To Hell

11- You Can’t Put Your Arms Around A Memory

7- Catcher in The Rye