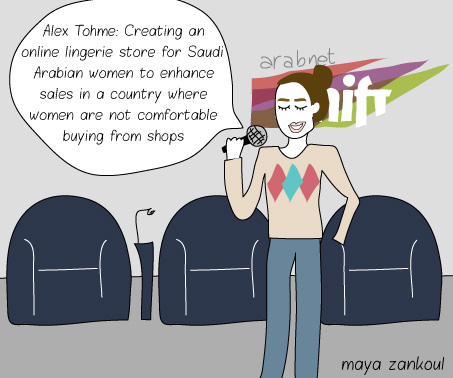 ArabNet today was very fun, vibrant and exciting. The smaller day 1 venue hosted concentrated workshops, while the brunt of the day was held in the massive Habtoor Hotel Emirates hall.

The first exciting event of the day was undoubtedly the Ideathon. The Ideathon is where chosen finalists get 2 minutes to pitch their plans for a specific startup. In these 120 seconds, the finalists will break down their business plan, how they plan to execute it and why they think it is a good idea that will generate profit. Among the finalists were two friends of mine, Sherif Maktabi and Alexandra Tohme (depicted here in a lovely sketch by MayaZankoul drawn live in ArabNet).

Alex’s idea was to start up an online lingerie store aimed at Saudi women. The need for this is apparent for Alex, and it is because women feel uncomfortable buying lingerie from stores, where the person behind a counter is a man. According to the numbers presented by Alex, women in the KSA spend just a little over 10$/year on lingerie, which is a very small amount, and thus, the market is largely untapped.

Sherif’s idea, Vida, is to reward everyday heroes and help us lead healthier, happier lives. Imagine going into a restaurant, and receiving a notification on your mobile “congratulations, you just won 50 vida points for checking in to resto X” now imagine being able to get an extra 200 points for eating the healthier meal options. These redeemable points reward you for eating healthier, going out more and enjoying life. The points also help businesses, whose products or services are deemed vid-able ones that make them more desirable.

Another brilliant idea was the Cashbury app, where the 30+ cards you carry on average in your wallet are replaced by your mobile phone. It is not exactly credit or debit cards, but the highly popular loyalty cards. Although not as ubiquitous in the Arab World, these loyalty programs are highly revered by both consumers and businesses in international markets. This digital loyalty card allows for more interaction between consumers and businesses, as well as group-oriented sharing through social media.

A more technical idea was one where you can utilize several networks to download chunks of data, which the presto wireless program can reconstruct on your machine, greatly speeding up downloads. Another innovative idea was n2oot.com, a group-buying website aimed at sending remote gifts. The integration of group-buying to gift sites makes several buyers for one gift possible, allowing more valuable presents to be purchased. 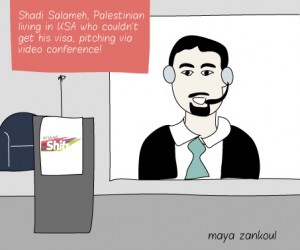 A moving pitch was by a Palestinian man, who could not make it to Lebanon, that was broadcast via Skype. His pitch was about a wholesale retail website, which would allow better, easier exchange between businesses and suppliers.

All in all, the ideas were beautifully presented and participants could vote for their favorite via scanning their QR codes after punching in their favorites.

The day ended with an interesting panel on Group Buying. After the sudden surge in groupon.com clones in the region, such as GoNabIt, Cobone, Makhsoom and several others, it was only natural one ArabNet session would be dedicated to this new online phenonmenon.

When I say new, I mean the whole industry, not just the MENA ones. Groupon is little more than 2 years old, and its valuation is already well beyond 15 Billion USD. However, this short period of time makes the dynamics of this business model and long-term plans unclear yet. That was one of the main points discussed by the panelists which acknowledged that the group buying scene is still very much in the making. 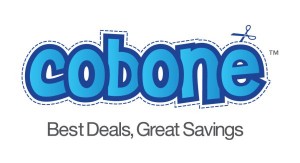 Perhaps the thorniest issue was customer loyalty. Audience members voiced their honest opinions that they would probably follow the deals, not the particular website offering them. To that, the panelists had little to argue for, except modest after-sales follow-up. In the end, competition is the best policy, and even though it would be hard to maintain customer loyalty as a group buying website, you could always vie for the best deals to keep people coming.

Another interesting point raised was that when the deal is outrageously extravagant, it’s to draw in attention, more than selling the deal, whereas more local and intimate deals are what the sites are usually looking for.

Another remarkable phenomenon in the MENA region is the male-majority when it comes to group buying. When Mr. Alexander McNabb asked the audience members who had bought a deal from a group-buying site, the majority were men, two of which had bought massages. This is a stark contrast from the data in the US, where 75% of groupon shoppers are female.

The MENA region GB sites though are experimenting with new deals, such as the one mentioned by Cobone’s Mr Paul Kenny, where Cobone offered a billboard space at a fair discount. So, there is room for innovation and tailoring the industry to the MENA market needs.

Also, the definition of a group buying site was clarified. A GB site merely sells you a coupon which you can redeem at a certain business. It does not actually sell you the product, at least no usually. So, GB sites aren’t exactly online marketplaces or retailers, but the link between willing businesses and customers looking for a deal.

Finally, the illustrious Alexander McNabb did a fabulous job of moderating this panel, with his crisp sense of humor and energy, he had the audience members well-engaged with the panelists throughout the session. 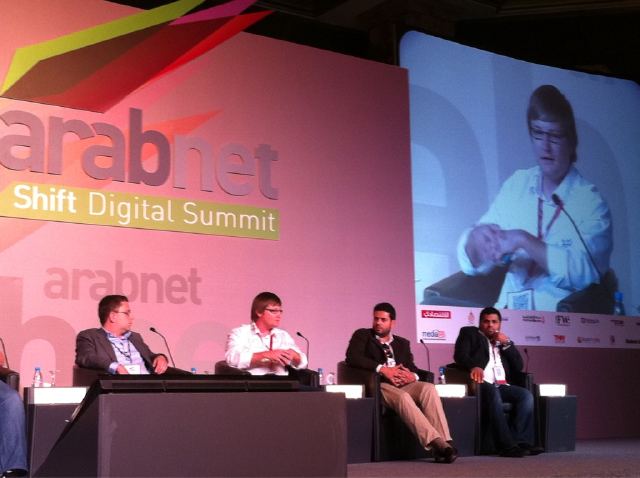