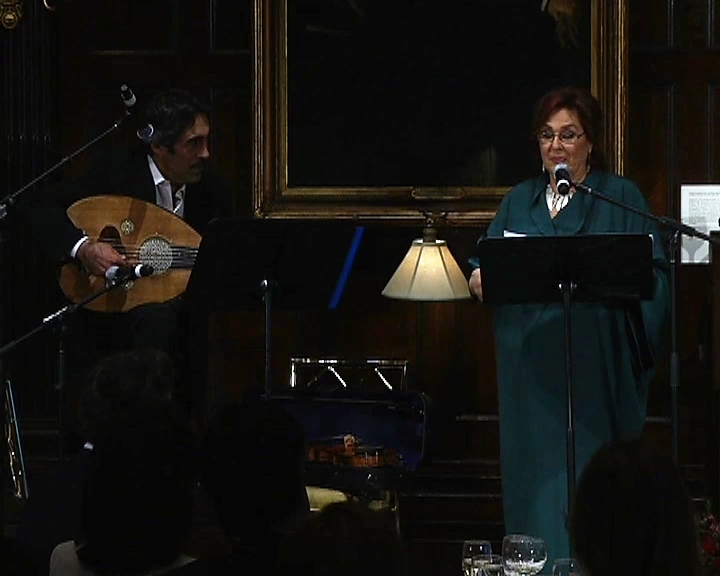 Lebanese virtuoso Nidal Al-Achkar paid tribute recently to great Arab poets and writers through a recital of poetry and music organised at the Harvard Club in New York under the patronage of His Excellency Ambassador Nawaf Salam, Lebanon’s Permanent Representative to the United Nations.

Reading to the music of internationally acclaimed Arab musician Simon Shaheen on his violin and ‘Oud’, Nidal Al Achcar recited poetry in English and Arabic from Sufi poets including Ibn Arabi, Al-Hallaj and Rabe’ah Al-Adaweya, and from more modern poets and writers including Bader Shaker Al-Sayyab, and Gibran Khalil Gibran. The superb weaving of poetry and music in an unparalleled elegance between word and melody, were coupled with the  best of New York’s hospitality from Ambassador Salam.

The virtuoso couple gave a stunning three hour-performance to an enthralled audience, which included the Lebanese expatriate community and Arab expatriate communities, as well as diplomats including His Excellency Nassir Abdulaziz Al-Nasser, President of the 66th session of the UN General Assembly, and lebanese Minister of Economy, His Excellency Nicholas Nahhas, who was attending a UN meeting of the global financial crisis.

The evening’s programme also included a keynote speech from Nidal Al Achkar about her story with the theatre, and her long journey and struggle to single-handedly keep one of the most active and best theaters in the Arab region, Al Madina Theatre, alive, despite civil wars, occupations and an ailing national economy . A short film about Al Madina Theatre, “17 Years in 17 Minutes”, produced by Lilliane Hanbali, was also shown.